Yuvraj Singh, one of India’s most exciting limited-overs players, will not be seen in the 2015 World Cup. However, in the previous edition in 2011, he was the star of India’s winning campaign as his all-round skills played a vital role at various junctures.

The value he brought to the team with his powerful batting and tricky left-arm spin was most evident in the Group B match against Ireland at the Chinnaswamy Stadium in Bangalore. Ireland had proved that they were no pushovers – just four days earlier, they had stunned England by chasing down 327 at the same venue. Also at the same venue a week ago, a poor bowling performance from India meant that they had to settle for a tie against England despite scoring 338.

A full house awaited the captains Mahendra Singh Dhoni and William Porterfield as they walked out for the toss. Dhoni called correctly and inserted the Irishmen in. Zaheer Khan gave the hosts a perfect start as he struck in each of his first two overs, clean bowling Paul Stirling for a duck and having Ed Joyce caught behind to leave Ireland in trouble at 9/2 in the third over itself.

Porterfield and wicketkeeper Niall O’Brien then got together and the duo steadied the ship with a commendable century stand under pressure. The partnership had blossomed to 113 when O’Brien was run out for 46, courtesy of a Virat Kohli throw from cover. In the 30th over, Yuvraj – who had figures of 2-0-4-0 at this point – snared his first wicket of the match as he had Andrew White caught behind. The two quick wickets meant Ireland were on the back-foot again at 129/4. 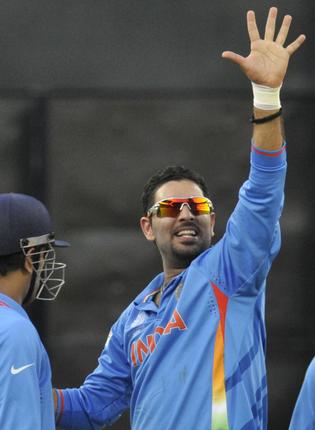 Yuvraj Singh celebrates after picking up his fifth wicket against Ireland at Bangalore in the 2011 World Cup (source – thehindu.com)

In his fifth over, Yuvraj dismissed the dangerous Kevin O’Brien – who had struck a record 50-ball hundred against England – cheaply, out caught and bowled. Four overs later, he turned the screws on Ireland’s innings by having Porterfield, who top-scored with a solid 75 from 104 balls, caught at cover by Harbhajan Singh. With ten overs remaining, the score read 172/6. Yuvraj had figures of 8-0-25-3 at this stage.

However, the Irish lower order failed to make good use of the slog overs and the batting powerplay. In the 42nd over, Yuvraj claimed his fourth victim as he trapped John Mooney leg-before. Off the fourth ball of his final over, he took his fifth wicket in the form of Alex Cusack, who too was out LBW for 24. Ireland were eventually bowled out for 207 with thirteen balls in the innings still unused. Yuvraj, who was the last of the six bowlers to bowl for India, finished with figures of 10-0-31-5.

Yuvraj’s return was his career-best in ODIs. His previous best of 4/6 also came in a World Cup match, against Namibia at Pietermaritzburg in 2003. He became the fifth Indian bowler to take a five-wicket haul in a World Cup match. Also, this was the first World Cup five-wicket haul by an Indian spinner. It was his spell that put the brakes on Ireland’s charge towards what would have certainly been a total of around 250.

Requiring 208 to win, India also lost two quick wickets. It was the medium pace of Trent Johnston that provided the breakthroughs – he first caught Virender Sehwag off his own bowling and then had Gautam Gambhir caught by Cusack at short fine leg. Johnston, with figures of 3-1-7-2, was looking threatening. But to Ireland’s misfortune, he could bowl only two more overs as he was forced off the field due to a knee injury. The third wicket to fall was the prized one of Sachin Tendulkar, who was out LBW to George Dockrell for 38. 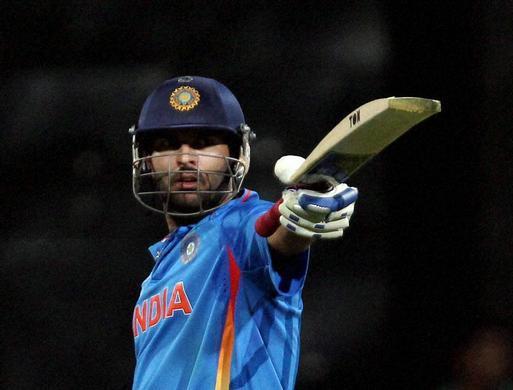 The score read 87/3 in 20.1 overs, and Yuvraj walked out to bat with his team not quite out of the woods. Just three overs later, a misunderstanding between him and non-striker Virat Kohli led to the latter’s run-out. India were now 100/4, with more than half of the target still to be achieved. Dhoni joined Yuvraj in the middle, and the dependable pair put on 67 runs for the fifth wicket before the Indian captain was dismissed by Dockrell for 34.

Yuvraj was playing according to the situation on the dry pitch, and had collected 40 runs from 64 balls with just two fours when Yusuf Pathan came out to join him. 41 runs were needed from 59 deliveries at this stage. Pathan shut out the Irishmen by clobbering sixteen runs off the first five balls he faced, much to the relief of the Bangalore crowd.

Off the fifth ball of the 46th over, Yuvraj reached a well-deserved half-century with a single off Mooney. He remained unbeaten on 50 from 75 balls with three fours, while Pathan, who hit the winning boundary, scored an unbeaten 30. India reached 210/5 with four overs to spare. Not surprisingly, Yuvraj was declared the Man of the Match.

Yuvraj thus became the first man to score a half-century and take five wickets in the same World Cup match. In all ODI cricket, such an instance has been recorded 17 times so far, with Shahid Afridi the only one to do it more than once (he has done it thrice). Yuvraj became the third Indian after Kris Srikkanth and Sourav Ganguly to achieve this feat.

As the tournament progressed, Yuvraj gave further evidence of his all-round ability. Against the Netherlands, he guided another chase with an unbeaten 51. Against the West Indies, he scored 113 and took 2/18. In the quarterfinal, he scored a crucial 57* and also scalped 2/44. In the final against Sri Lanka, he took two more wickets for 49.

Yuvraj ended the tournament with 362 runs – the eighth highest tally – at 90.50 and 15 wickets – the joint-fourth highest tally – at 25.13. For his efforts, he was named as the Player of the Tournament, becoming the second Indian after Sachin Tendulkar (in 2003) to win this honour.