An unprecedented 5870 runs were scored in the recently-concluded four-match Test series between Australia and India for the Border-Gavaskar Trophy. Never before had so many runs been scored in a four-Test series.

Incidentally, the previous highest tally of 5651 also came in a series between the same teams – in Australia in 2003-04. The pitches rolled out for the series were quite uncharacteristic to what one usually comes across in Australia. There was precious little for the bowlers from either side to rejoice about.

The Tests at Melbourne and Sydney both produced draws – the previous drawn Tests at the MCG and the SCG were back in 1997-98 and 2003-04 respectively. Since the visit of India is a lucrative event for Cricket Australia, it is possible that measures were taken to ensure that all the Tests last their entire duration.

Having said that, the cricket itself in the series was far from dour. The end result might have been 2-0 in Australia’s favour, but it would be fair to say that India more than held their own throughout the rubber, something which had been amiss in their recent overseas tours. At least three of their batsmen enhanced their reputations by the time the series concluded, and most of the times they matched their Australian counterparts stroke for stroke. 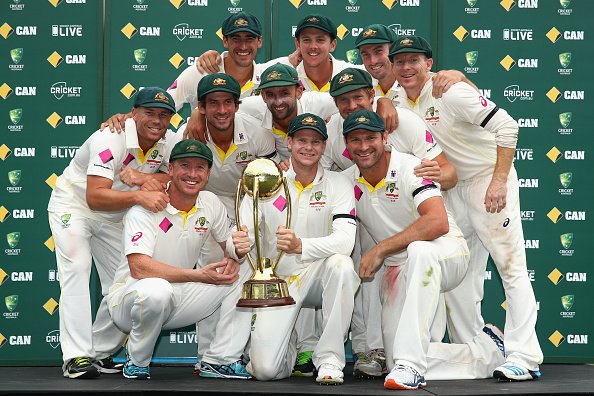 The victorious Australian team pose with the Border-Gavaskar Trophy which they regained after defeating India 2-0 (source – sportskeeda.com)

The difference lay in the bowling performances of the two teams. Australia’s two victories were ultimately shepherded by a combination of clever bowling – from Nathan Lyon at Adelaide and from Mitchell Johnson at Brisbane – and at the same time, poor bowling from the Indians. In fact, India failed to take 20 wickets even once. Looking back, one wonders what might have been the result in the second Test at Brisbane had India not allowed Australia to get to 505 from 247/6 in the first innings.

As has often been the case, Mahendra Singh Dhoni – the Indian captain for the second and third Tests – was criticised for his defensive field settings and unwarranted shuffling of bowlers. Dhoni, to the surprise of all and sundry, decided to call it quits from Test cricket immediately after the Boxing Day Test ended. Statistically, he will go down as India’s most successful Test captain, but his forgettable record overseas will always refute that claim.

His obvious successor was Virat Kohli, who in fact had lead India in the first Test at Adelaide as Dhoni was out due to injury. As the series unfolded, Kohli began to relish feasting on the much-vaunted Australian bowling attack. He ended up with as many as 692 runs at 86.50 in the series – the highest by an Indian in a series in Australia, surpassing Rahul Dravid’s tally of 619 runs made in 2003-04. In the exciting Adelaide Test, Kohli the captain also showed intent by going for the kill on the final day.

While experts were divided on whether India should have played for the draw or not, Kohli himself was highly satisfied of the way his team approached the fifth-day chase of 364. Indeed, India fell only 48 runs short and at 242/2 with Kohli and Murali Vijay at the crease, they actually had an opportunity to score a historic win. But once the captain fell for a brilliant 141, the ship sank fast as the visitors lost eight wickets in the final session.

Besides Kohli, who struck four hundreds and also became the first man to hit three hundreds in his first three innings as captain, the other Indian batsman who reaped rich benefits was Vijay. True to his nickname of ‘Monk’, Vijay left more deliveries in the series than any other batsman from either side. He logged 482 runs – the most by an Indian opener in a series in Australia – and the highlight was a high-quality 144 on the opening day at Brisbane – the venue which assisted the fast bowlers the most.

Then there was the ever-improving Ajinkya Rahane, who was among the runs as well. He scored 399 runs which included a glorious career-best of 147 at the MCG, where he was involved in a 262-run stand with Kohli, who also achieved a career-best of 169. He was also at the crease to ensure that India saved the final Test. Young Lokesh Rahul, in his debut series, put behind a shoddy first game at Melbourne to score a patient hundred at Sydney. 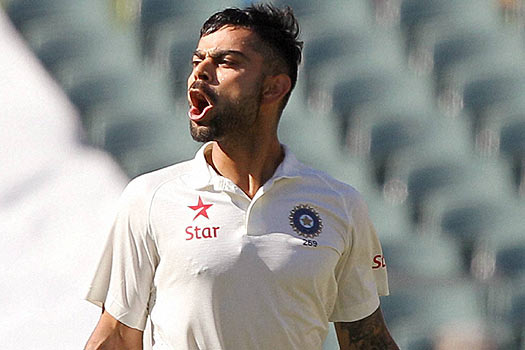 Transcending the trio of Indian batsmen was Australia’s stand-in captain Steven Smith. Entrusted with the top job after Michael Clarke pulled out after the first Test due to his recurring back injury, Smith came through with flying colours. Not only did he have the satisfaction of winning his first Test as captain – at Brisbane – but he also scored a whopping 769 runs in the series at an average of 128.16.

Just like Kohli, captaincy seems to bring out the best in Smith, and this series might just be the turning point of the 25-year-old’s Test career. He hit a hundred in the first innings of each Test, with a best of 192 at Melbourne. Smith’s tally of 769 is now the best ever by an Australian in a series against India, going past the 715 runs scored by none other than Donald Bradman in 1947-48. He now has eight hundreds in 26 Tests, while Kohli has ten in 33 Tests.

Irrespective of the nature of the pitches, the superlative efforts of these two young potentially great batsmen deserve to be applauded. Home openers David Warner (427) and Chris Rogers (417) also made hay, with the former kick-starting the series with a rip-roaring 145 at Adelaide and the latter scoring six consecutive fifty-plus scores, though he could not reach to a hundred.

There were very few good individual bowling performances in the series. Two of them stand out – Lyon’s match-winning 12/286 at Adelaide, where he exploited a final-day pitch to its maximum advantage with his off-spin, and Johnson’s equally vital four-wicket burst in the second innings at the Gabba. Before that spell, Johnson had crashed a counter-attacking 88 from number eight. Riled by Indian fielders when he came out to bat with his side in trouble, Johnson gave it back to them with one of the best all-round displays of his career.

Replacing the injured Michael Clarke as Australia’s captain, Steven Smith scored 769 runs at 128.16 and was named Man of the Series (source – sports.ndtv.com)

The series had its fair share of on-field verbal duels, most notably between Johnson and Kohli. Before the series began, one would have expected the cricket to be played in a healthy spirit in the wake of Phillip Hughes’ tragic death, but that was not to be. The home side could not deliver their promise in this regard. Aggression from certain players does work in their favour, but tasteless comments on the field can well be avoided. One needs to draw the line at some point and realise that millions of people across the world are watching the unruly antics.

Mohammed Shami finished decently with 15 wickets but could not deliver when it mattered. Ravi Ashwin, Umesh Yadav and Ishant Sharma all leaked runs heavily. Varun Aaron came into the series with confidence, but was wayward enough to render his pace impotent. The only bowler from both sides to take more than 15 wickets was Lyon, who finished with 23 scalps at 34.82.

The only bowler to average less than 30 was the debutant Josh Hazlewood, who impressed with 12 wickets at 29.33 while also maintaining a tight economy rate. Even the much-feared Johnson had an ordinary return, save for his match-winning spell at Brisbane. It was a struggle for bowlers, and in the end Australia triumphed because they had a better bowling attack and also because they were much more suited to bowl in their home conditions.

With the conclusion of this series, the 2014-15 Test season has come to an end. Australia, who were possibly expected to win the series by a higher margin, will be satisfied with the regaining of the Border-Gavaskar Trophy after enduring a torrid time against Pakistan in the UAE. India, though they could not win a match, will look at the positive side of not repeating the whitewash suffered in 2011-12. At the same time, they must be ruing the missed opportunities in the two Tests they lost.

The unsavoury incidents on the field did mar the series a bit, especially since it was slated to be a tribute to Hughes. However, Australia did win the series for their departed mate, and the respect paid to Hughes throughout the series by their batsmen on reaching a score of 63 struck a poignant note. A commemorative plaque was also unveiled in his honour at the SCG, the venue where he played his last innings.

It has been a highly emotional summer of cricket in Australia, which will culminate in the final of the eleventh ICC World Cup on 29th March. The spotlight has shifted to ODI cricket, as all teams are now gearing up for what promises to be an exciting and possibly the most open World Cup tournament ever.

As for the Border-Gavaskar Trophy, the next edition will take place in India in 2016-17. Will Australia be able to exorcise the demons of their 2012-13 defeat? Australia last won a Test in India back in 2004-05, while India last won a Test in Australia in 2007-08. An interesting question has arisen – which of the two teams will first win an overseas Test against the other in the near future? Only time will tell.