Ireland have named their 15-man squad for the 2015 ICC Cricket World Cup to be held in Australia and New Zealand next month. The squad will be the same as the one which is currently in the United Arab Emirates for a triangular series with Afghanistan and Scotland.

A look at the squad suggests that coach Phil Simmons has gone for a nice blend of proven experience and promising talent. Five players from the squad – including captain William Porterfield – will be playing their third World Cup whereas six players will be making their maiden appearance in the tournament. Having missed out on a quarterfinal berth in 2011, Ireland will be desperately looking to make the knockouts this time around.

On paper, the Irishmen look capable enough to produce the best performance in their World Cup history. Most of the members in the squad have sharpened their skills on the English county circuit, and others have benefitted from the increasingly professional domestic system back home. Ireland are clubbed in Group B with defending champions India, two-time winners West Indies, 1992 champions Pakistan, South Africa, Zimbabwe and UAE. In order to make the quarterfinals, they will need at least three wins from six matches.

On the batting front, Ireland possess a strong line-up which can flay the best of bowling attacks on any given day. Paul Stirling has established himself as one of the most dangerous openers in limited-overs cricket, and has already scored five hundreds in his 47-match career, besides having maintained an excellent strike rate of 94.05. Two of his hundreds have come against a full strength Pakistan side. If Ireland are to aim for big totals on the board, Stirling’s performance will be of great importance. 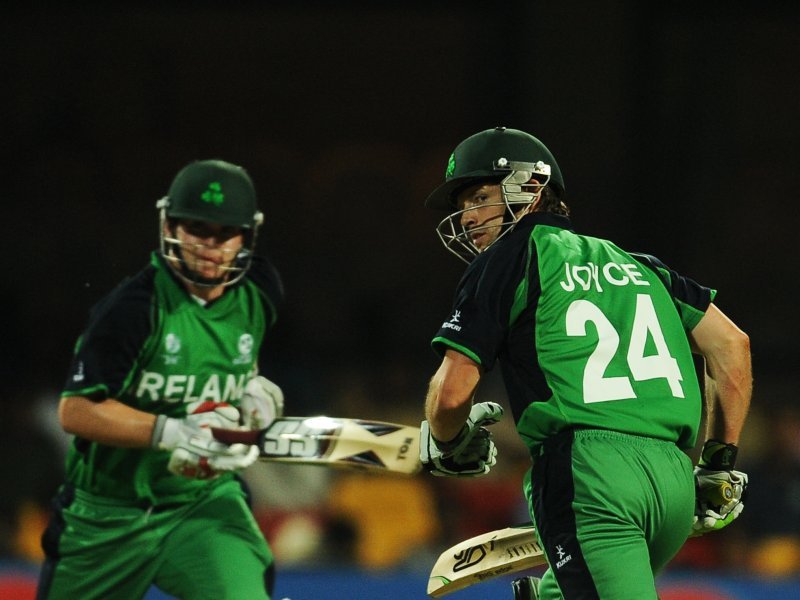 If Ireland are to put up big totals in the World cup, a lot will depend upon Paul Stirling (left) and Ed Joyce (source – cricketgames.blogspot.com)

Skipper Porterfield himself is a solid and dependable opener, and has previously churned out gritty knocks in World Cup matches, such as the match-winning 85 against Bangladesh in 2007 and the purposeful 75 against India in 2011. He reserved his best ODI display for the historic Malahide ODI against England in 2013, where he scored 112. ‘Purdy’ has proved to be an exemplary leader of the Irish team, and this will be the second time he will lead the country in a World Cup.

Besides Stirling and Porterfield, the talented Andrew Balbirnie is another opening option. He earned his call-up following a barnstorming 129 off just 96 balls against an international-strength New Zealand A outfit at Dubai in November, and is one of the up-and-coming Irish batsmen earmarked for the future.

The fulcrum of the Irish line-up will be Ed Joyce, who enjoyed a magnificent county season for Sussex in 2014. The vastly experienced southpaw already has an ODI hundred in Australia – he made 107 while playing for England at Sydney in 2006-07. He had an ordinary 2011 World Cup, where he scored 176 runs at an average of under 30. This time, he will be looking to make amends and he can be expected to be a consistent performer for the Irishmen.

The O’Brien brothers have been an indispensable part of the Irish cricket side for the last decade, and it will not be any different this time. Both of them have played priceless roles in two of Ireland’s most famous World Cup victories – Niall scored 72 against Pakistan at Kingston in 2007, while Kevin – who is the team’s vice-captain –  scored a record-shattering 113 from 63 balls against England at Bangalore in 2011, an innings that stunned and delighted the cricketing world in equal measure.

Niall of course is a wicket-keeping option too while Kevin can be a tricky bowler to deal with. It is quite likely that the first-choice wicketkeeper will be Gary Wilson, another spunky cricketer who has honed himself on the county circuit. Wilson almost guided Ireland to victory over the West Indies in the 2011 World Cup, scoring a rapid 61 before his dismissal – given out incorrectly – sparked a collapse. It will be interesting to see who between Wilson and O’Brien will get the gloves when Ireland walk out to play the West Indies in their opening game.

The squad possesses enough all-round depth to pose a dilemma to the selectors. In this department, Kevin O’Brien will have support from the seasoned Alex Cusack, the promising Stuart Thompson and the ever-reliable John Mooney. Cusack’s role with the bat in that famous Bangalore match almost went unnoticed, and his medium-pace can be a handy partnership-breaker. Thompson is another future hope who impressed on the Caribbean tour last year.

Craig Young, who was one of the few positives for Ireland on the acclimatisation tour to Australia and New Zealand, will be the player to watch out for (source – cricketireland.ie)

Mooney has made an applaudable comeback after pulling out of the game temporarily due to personal issues – he smashed 96 against Scotland on his return last September. His ten-wicket haul in the Intercontinental Cup final in 2013 showed that he can be a powerful all-rounder when on song. He will be part of a pace attack which may be looking a bit thin following the retirement of Trent Johnston and the defection of Boyd Rankin to England.

Apart from the above-mentioned all-rounders, the pacemen in the squad are Tim Murtagh, Craig Young and Peter Chase. Murtagh collected 58 wickets for Middlesex in the county championship last season, but he will have to bring his ‘A’ game on bouncier tracks in his maiden World Cup appearance. Young is the most promising fast bowler in Ireland at the moment. He took a five-wicket haul on ODI debut against Scotland, and can be the surprise element against Ireland’s more established opponents.

Chase is another exciting prospect who made his first-class debut for Durham in 2014. He is yet to make his international debut, and it remains to be seen whether he will shine on the big stage. Rounding off the squad are the spinners George Dockrell and Andy McBrine. Left-armer Dockrell was only 18 when he played the 2011 World Cup, but did well to take seven wickets. He is a lot more mature now and provides Ireland with a highly effective weapon in the middle overs. Young off-spinner McBrine has made an encouraging start to his career, having made his debut in the 2014 World Twenty20.

It can be said that pace bowler Max Sorensen and batsman Andrew Poynter are a bit unlucky to miss out, but this underlines the rising amount of talent knocking at the door. There is healthy competition for places in the playing eleven, which bodes well for Ireland’s cricketing future. Sorensen, along with fellow pacemen Greame McCarter, Barry McCarthy, Tyrone Kane and Eddie Richardson will also tour with the squad to bowl in the nets and act as cover for any possible injury.

Ireland’s acclimatisation tour to Australia and New Zealand in September was quite forgettable. Of the seven matches, the boys in green managed only two victories. Admittedly, the squad was not at full strength for these matches, but the margins of defeat, even against second-string state sides, were heavy enough to feel worried.

The few silver linings were the two victories – by 124 runs and by one wicket while chasing 305 – against Australian Capital Territory, Young’s eleven wickets at 21.63 including a five-wicket haul against Queensland and the relatively consistent batting of Balbirnie and Niall O’Brien.

However, Ireland have always tended to raise their game in international events. In the 2011 World Cup, their performance was much better than the two victories in six games suggested. Both these victories – against England and Netherlands – were achieved by chasing 300-plus scores. India, West Indies and South Africa were all given a scare at some point in their matches. It was the opening game against Bangladesh that must have hurt the most – Ireland failed to chase down 205 and lost by 27 runs, a defeat which probably cost them a quarterfinal spot.

Gary Wilson had recently said that reaching the World Cup semi-finals will take Ireland to the next level and make the cricketing world notice. It is great to see the change in attitudes and in the levels of professionalism since Ireland first played a World Cup match – a thrilling tie against Zimbabwe in 2007 which set the ball rolling for their continuous rise. This World Cup is of immense importance not just for Ireland, but for all the participating Associate nations.

Late last year, the ICC took the pathetic decision of reducing the number of teams in the World Cup to just ten, starting from the 2019 edition. Also, instead of providing a realistic pathway to Test cricket, all that the ICC came up with was a feeble attempt to appease the Associates through a Test Challenge. Add to that the unfairly low number of international fixtures played by the Associates, and one cannot help but feel that the ICC is trying its best to stifle the development of the game in non-Test nations.

Thus, this is Ireland’s big opportunity to serve yet another reminder to the hypocrites who claim to be ‘custodians’ of the game. The opening game against the West Indies at Nelson on 16th February is arguably the most crucial fixture for Ireland – a win there will seriously brighten their chances of entering the quarterfinals. Victories over UAE and Zimbabwe are expected, though none of them can be underestimated. India’s ordinary bowling and Pakistan’s unpredictable batting can be taken advantage of. A win over either of them can prove to be another booster for Irish cricket.

If Ireland’s batsmen play to their capabilities and the bowlers give their best, the 2015 World Cup could be the beginning of another glorious chapter in Irish cricket history. Backed by their passionate supporters and armed with their famed spirit, there is no reason why they cannot become the fairytale story of the tournament again.