This two-Test series is set to be the fourth series between Pakistan and Sri Lanka in less than three years. The two nations have developed a healthy rivalry in recent times and the cricket between them has often been interesting to watch. Again, the absence of a third Test is disappointing.

The same two venues which hosted the recently-concluded series against South Africa will be used for this series. The Galle International Stadium will host the first Test from August 6-10, while the Sinhalese Sports Club (SSC) in Colombo will host the second Test from July 14-18. Sri Lanka’s defeat to South Africa at Galle last month was their first in five matches (three wins) at the ground, whereas at the SSC, the hosts have won once and drawn four of their last five Tests. Sri Lanka have not lost at the SSC since 2003-04. Pakistan have played thrice at Galle, winning once and losing twice. At the SSC, they have played five times, winning once and drawing four times.

Sri Lanka have dropped batsman Dinesh Chandimal and spinner Ajantha Mendis, both of whom underperformed in the series against South Africa. Young wicketkeeper Niroshan Dickwella retains his place after making an impression with the bat against South Africa. Mahela Jayawardene, one of the best batsmen of recent times, will be playing the final two Test matches of his career at his two favourite grounds. Rangana Herath, who bowled a marathon spell in the second Test against South Africa and has bowled more overs than any other bowler in this calendar year, will be again expected to shoulder the responsibility of leading the bowling attack. His fellow spinner Dilruwan Perera too has proved his worth thus far. Fast bowler Nuwan Pradeep returns to the team and might play in the eleven as well. As always, Kumar Sangakkara will be the prized wicket for Pakistan, against whom he averages a whopping 80.19 in 19 Tests.

Angelo Mathews has risen to become one of the most reliable batsmen in the world ever since he took over the reins of captaincy. After another productive outing with the bat against South Africa, his Test average now stands at exactly 51. As a captain, he is evolving. A series win in England was followed by the defeat at home to South Africa, but there is no doubt whatsoever that he is the perfect man to lead Sri Lanka. His defensive tactics were criticised the last time he led Sri Lanka against Pakistan, when his opposite number Misbah-ul-Haq helped his side pull off a series-levelling win at Sharjah in January. He will be looking to turn the tables on Misbah this time around. 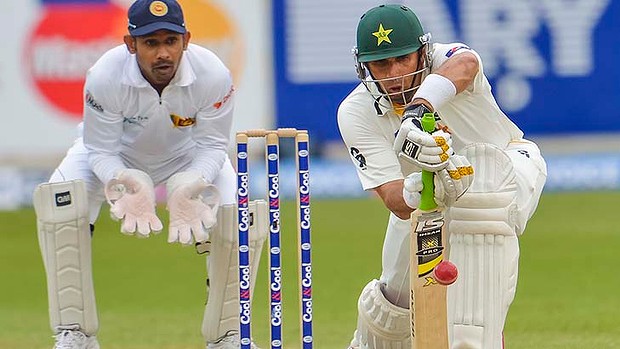 Pakistan have not played Test cricket for more than six months – their last series was against Sri Lanka in the UAE. This may result in a bit of rustiness coming into this series. Limited-overs regular Mohammed Hafeez has been dropped from the squad that last played, while two players who last played in 2011 – batsman Umar Akmal and fast bowler Wahab Riaz – have been recalled. Sarfraz Ahmed has been retained as the wicket-keeper. Even though Umar Gul has missed out due to injury, the pace attack looks in quite good shape with Junaid Khan, Rahat Ali and Mohammed Talha in the mix. Pakistan’s trump card, off-spinner Saeed Ajmal will have left-arm spinner Abdul Rehman for company. Senior statesmen Misbah and Younis Khan, and the young trio of Ahmed Shehzad, Azhar Ali and Asad Shafiq will be looking to put in a strong collective batting display.

Misbah-ul-Haq is now 40 years old, but still going strong. Captain of both the Test and ODI teams, Misbah has won the respect of his team-mates in the last four years, ever since his took over the captaincy after the 2010 spot-fixing scandal. He may possess a calm demeanour, but his intensity to win matches for Pakistan more than matches that of the younger players. Under him, the team has had a solid look to it and Pakistan will continue to have a reassuring presence in the team as long as he contributes with the bat and leads by example.

Sri Lanka and Pakistan have played each other in 46 Tests, of which Pakistan have won 17, Sri Lanka have won 11 and 18 have been draws. In 18 Tests in Sri Lanka, the hosts have won four times to Pakistan’s six, the remaining eight games being drawn. The last time the two teams met each other was in the UAE in 2013-14, when a three-Test series was drawn 1-1. The last series in Sri Lanka was played in 2012, when the hosts won a three-Test series 1-0. The last time Pakistan won a series in Sri Lanka was in 2005-06; since then they have lost in 2009 and 2012. Of the last ten Tests, six have been drawn, with the two teams winning twice each. 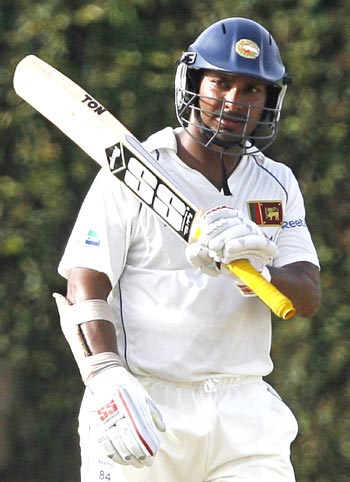 Kumar Sangakkara has shown remarkable consistency over the last year, and his wicket will as always be the prized one for Pakistan (source – ndtv.com)

That Kumar Sangakkara is one of the best modern-day batsmen is a known fact, but when he is up against Pakistan, he tends to take his game to another level altogether. From 37 innings in 19 Tests against Pakistan, ‘Sanga’ has racked up 2486 runs at an average of 80.19. Of his 36 Test hundreds, nine have come against Pakistan. He has enjoyed a rich vein of form in the past year or so, and his remarkable consistency has seen him score at least one half-century in each of his last seven Tests, and twelve of his last thirteen Tests. The classy left-hander is a tough nut to crack once he has his eye in, and his battle with the wily Ajmal should be worth watching. In his last series against Pakistan, he scored only 166 runs in three games, and hence will be raring to resume his heavy scoring against his favourite opposition.

Just like Sangakkara, Pakistan captain Misbah-ul-Haq too has made at least one half-century in each of his last seven Tests. In his most recent Test outing, he scored an unbeaten 68 at nearly a run-a-ball to help Pakistan chase down 302 at Sharjah to level the series against Sri Lanka. The 40 year-old will be looking to end his team’s three-and-a-half year wait (since winning in New Zealand in 2010-11) to win an overseas series against a ‘top eight’ country, and much will depend upon his batting and leadership. Even if Sri Lanka get the first couple of batsmen quickly, they would do well to know that the advantage will not be gained until the unflappable Misbah is dislodged from the crease.

I expect Sri Lanka to bounce back from their defeat to South Africa. Pakistan will need a bit of time to get back into Test mode, and this being just a two-match series, the advantage is with the home team. My prediction – a 1-0 win for Sri Lanka, with the win most probably coming at Galle.