The 2007 World Cup in the West Indies was a highly forgettable one for the Indian cricket team. Having finished as runners-up in 2003, expectations were high four years later for the Men in Blue to go one step further. However, the Rahul Dravid-led outfit lost two out of its three games (to Bangladesh and Sri Lanka) in the group stage and bowed out of the tournament within two weeks, crushing the dreams of a billion fans.

India’s solitary victory came at Port-of-Spain against Bermuda on 19th March, 2007, sandwiched between an upset five-wicket defeat to Bangladesh and a depressing 69-run defeat to Sri Lanka, which was the knockout blow. The Bermudans were playing their first ever World Cup, and their utter inexperience was exposed in their first game against Sri Lanka where they were shot out for 78 en-route to a 243-run thrashing. After the defeat to Bangladesh, India had to win both its remaining games, and this game against Bermuda presented the batsmen – who folded for 191 all out against Bangladesh – with a good opportunity to find some form ahead of the crucial last match.

Bermuda captain Irving Romaine invited India to bat after winning the toss. Off the first ball of the second over, 17 year-old all-rounder Malachi Jones had a dream moment. He struck with his very first ball in the World Cup, removing Robin Uthappa courtesy a stunning catch by Dwayne Leverock in the slips. This dismissal, which sparked frenzied celebrations from the Bermudans, has gone on to become one of the most famous World Cup catches- http://www.youtube.com/watch?v=CGuPP8vLlTc. But this was to be a false dawn for Bermuda, as they then ran into Virender Sehwag, who proceeded to clobber their amateur bowlers. Sehwag shared a rollicking 202-run partnership in a little over 28 overs with Sourav Ganguly for the second wicket before getting out for 114 off 87 balls (17 fours, 3 sixes). 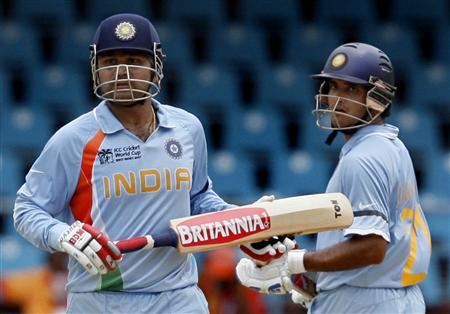 Virender Sehwag (left) and Sourav Ganguly made merry against lightweights Bermuda in 2007 with a double-century stand that guided India to a record total (source – reuters.com)

Ganguly (89 off 114 balls) and M.S Dhoni both perished in the next ten overs, but that brought Yuvraj Singh and Sachin Tendulkar (batting at number six) at the crease, the score reading 269/4 in the 39th over. The two unleashed mayhem and rendered all the bowlers and fielders helpless. Yuvraj’s super-charged innings of 83 off 46 balls (3 fours, 7 sixes) made look Sehwag’s century sedate in nature. The fifth-wicket stand fetched 122 in a mere 10.2 overs. Tendulkar too joined in the party, smashing an unbeaten 57 from 29 balls as India piled up a huge 413/5 – the highest ever team total in the World Cup, eclipsing Sri Lanka’s 398/5 against Kenya at Kandy in the 1996 edition. The modest crowd at the Queens Park Oval was treated to 18 sixes – which equalled the then ODI record set by South Africa against the Netherlands just three days earlier.

The numbers in the two halves of the first innings bear quite a contrast. The first 25 overs saw a solid 153 runs being scored, while a whopping 260 were added in the latter half. Every batsman besides Uthappa had at least one six to their name, as India looked hell-bent to show their fans that they were very much alive in the tournament. Jones and Leverock, the two contributors of the first wicket, were hammered for 1/74 in seven overs and 1/96 in ten overs respectively. Only Kevin Hurdle (1/53 off ten overs) and Delyone Borden (2/30 off five) bowled with any control. After the debacle against Sri Lanka, an even bigger defeat loomed large for the Bermudans, and so it happened.

That Bermuda managed to get to an eventual total of 156 in 43.1 overs was only due to David Hemp’s 76. Hemp, with the experience of playing for Glamorgan, faced 105 balls and remained unbeaten as his team-mates capitulated around him. Ajit Agarkar and Anil Kumble both took 3/38. The final margin of victory was 257 runs – a new ODI record at that time and still a World Cup record. It obliterated the previous World Cup record of Australia’s 256-run victory over Namibia at Potchefstroom in 2003 by just one run.  The ODI record as of today is the 290-run margin inflicted by New Zealand against Ireland at Aberdeen in 2008.

Besides being the only World Cup total of over 400, this was also India’s first 400-plus total in all ODI’s. Since then, they have scored more than 400 twice, with their highest being 418/5 against the West Indies at Indore in 2011-12. India’s previous highest total in the World Cup was 373/6 against Sri Lanka at Taunton in 1999, while their previous biggest ODI victory was by 200 runs against Bangladesh at Dhaka in 2003.

Of course, little had to be read into India’s record win as the do-or-die last group match against Sri Lanka beckoned, but it did fill the Indian fans with optimism of a turn-around and of sealing a spot in the next round. However, the Indian batsmen caved in for the second time in three matches, this time to Muttiah Muralitharan and Co, as the 1983 champions fell short of Sri Lanka’s 254/6 by 69 runs. Sehwag’s century against Bermuda was an aberration in a string of poor scores and he found himself out of the team a few months later.

It was a short and strange World Cup for India. Two defeats, in which they were bowled out for 191 and 185 ensured their ouster from the tournament. But in between, they racked up a record total which ultimately counted for little.