A classic Test match at Headingley culminated in a historic series victory for Sri Lanka on Tuesday. Shaminda Eranga bowled one of the most significant deliveries in the history of Sri Lankan cricket when he dismissed the obdurate James Anderson with a short one off the penultimate ball of the match. It was a delightfully sweet victory for the Lions, who proved many people wrong with their maiden series win in England.

Even I had predicted a 1-0 win for England in my series preview two weeks ago, and I am glad that I had to eat my words. The two-Test series churned out some riveting cricket – both matches being thrillers, more so the second Test – and Sri Lanka were deserving winners. Michael Vaughan, among others, had questioned the Sri Lankan bowling attack’s ability to compete at the Test level, and said that the visiting pace bowlers were at best of county standard. But at Headingley – regarded as a haven for English bowlers – it was the understated Sri Lankan attack that outshone its much-touted counterparts. The leadership and excellent performances of Angelo Mathews was a major factor, and his 160 in the second innings at Headingley was worth its weight in gold, not to mention his haul of 4/44 in the first innings which ensured that England’s lead was limited.

It was a proud moment for the Sri Lankan team as they clinched a historic series win in England at Headingley (source – channelnewsasia.com)

After the narrow escape at Lord’s , where Nuwan Pradeep – probably the world’s weakest number eleven batsman – defended the last five deliveries, Sri Lanka seemed desperate to add Test glory to their 3-2 ODI victory. The last match of that ODI series saw a fair bit of controversy with the Mankading of Joss Buttler by Sachitra Senanayake, and Mathews was wrongly accused in some quarters for not playing in the spirit of the game . This was the typical hypocrisy of the English team on display – where was the spirit when Stuart Broad did not walk in spite of nicking one at Trent Bridge in last summer’s Ashes?  Later, the English team cast doubts on Senanayake’s bowling action as well. All this definitely galvanised the Sri Lankans into the splendid effort at Headingley – their never-say-die spirit showed in the way they overturned a 108-run first-innings deficit.

As if being doubted of their abilities was not enough, Sri Lanka also had to let go of their coach Paul Farbrace, who defected to the English camp to become assistant coach under Peter Moores. Sri Lanka were having a good run, especially in the ODI format, in the lead-up to the tour of England. Farbrace’s transfer led to talk of Sri Lanka’s secrets being spilled out to their rivals. I have always felt that this obsession with foreign coaches is a bit over-hyped, and Marvan Atapattu and Chaminda Vaas strongly justified that. Atapattu deserves the permanent coaching job after this stellar success while Vaas’ rich experience was a vital cog in the fast bowlers’ performances. Dhammika Prasad, who ripped through England’s top order on the fourth evening at Headingley, made a gesture of respect to Vaas in the dressing room when he completed his five-wicket haul the following day.

Prasad was one of the unexpected success stories of the Headingley Test. Not selected for the Lord’s Test, he rattled the English batsmen with his amazing spell on the fourth day – the best display of bowling by a Sri Lankan fast bowler in quite some time. He, along with Pradeep, Eranga and Mathews, not to mention the discipline of veteran spinner Rangana Herath, showed England how it is done – while England bowled poorly in the second innings, their visitors were up to the mark in both the innings – first denying England an opportunity of a much bigger lead, and then bowling determinedly in the run chase, their efforts finally paying off. Herath contributed with the bat as well, sharing a game-changing partnership of 149 for the eighth wicket with Mathews in the second innings. 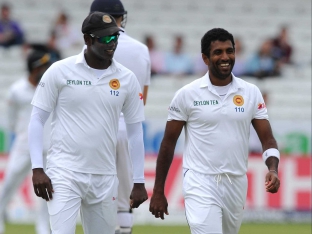 Then of course there was Kumar Sangakkara, who seems to be getting better by the day. He made at least fifty whenever he went to the crease, and his contribution toward the team as a senior statesman has been immense. There were those who said that he is usually found wanting in Tests outside the sub-continent. With this performance, all those voices should shut up forever. Sangakkara came early to England, played county cricket for Durham and meticulously prepared himself for the series. His favourite batting partner Mahela Jaywardene also made a couple of crucial half-centuries, and by a quirk of fate, both of them have exactly the same number of Test runs (11493) as of now. Opener Kaushal Silva has taken to Test cricket well, and this should be a positive sign for Sri Lanka’s Test future.

England fought back with guts on the final day through a solid century from Moeen Ali and his last-wicket stand with Anderson, who consumed 55 balls without scoring, but Sri Lanka thoroughly deserved the win – it would have been bit of a travesty had England escaped with a draw. England’s new batting hopes – Sam Robson, Gary Ballance and Ali – all made hundreds in the series, but the team as a whole lost the key moments. In hindsight, Alastair Cook should have declared a bit earlier at Lord’s, and at Headingley, their listless bowling, coupled with Prasad’s spell, ensured that the good work of the first innings was completely undone. The pressure on Cook is building fast, with both his batting and leadership under the scanner ever since the Ashes debacle in Australia. The series against India begins soon, and he will be itching to turn things around.

For now, Sri Lanka must realise that this win can be the catalyst for rebuilding their Test fortunes. The Sri Lankan cricket administrators have time and again displayed ineptness in their responsibilities and given step-motherly treatment to Tests of late. Historically Sri Lanka have always been a better limited-overs side, and the World T20 win may have made the nation proud, but this maiden win (in a series of more than one Test) in England should rank way above any limited-overs successes. Hopefully, we will get to see a proper three-Test series the next time Sri Lanka travel to England, as this time unfortunately an extra Test was snatched from them and handed over to India for mostly commercial interests.

The joyous scenes when Eranga dismissed Anderson showed how much this victory meant to the Sri Lankans. Next up for them is the home season against South Africa and Pakistan, followed by the New Zealand tour and then the World Cup (where, according to me, they will start as one of the favourites). Given the way they performed in England, they are the team to beat in world cricket at the moment.