Considering the discouraging last few months of corruption charges in the sub-continent, bullying of the have-nots at the ICC and myriad hotch-potch two-Test series, the denouement of the Test season could not have been more refreshing. The three-Test series between South Africa and Australia is locked at 1-1 after two duels, and the finale is set to begin at Newlands in Cape Town on Saturday, 1st March.

It has been a fascinating series so far between the two best teams in the world. The pre-series hype had centered around the battle between the pace attacks, and connoisseurs of the game have not been disappointed. It has indeed been a pleasure to watch the top pace bowlers in the game battle it out in a high-quality Test series, which has again confirmed the tendency of an Australia-South Africa rubber to churn out the most hard-fought Test cricket. And thankfully, unlike the last time Australia toured South Africa (in 2011-12, when a two-Test series was drawn 1-1), we do have a decider to look forward to and it promises to be a cracking contest.

Mitchell Johnson, fresh from his domination of England, continued in the same vein in the opening Test at Centurion as he ran through the world champions at their own fortress – South Africa had lost just once in 18 Tests at the venue since re-admission before this – en-route to a career-best match haul of 12/127 as Australia triumphed by 281 runs. Greame Smith’s men had been ambushed by the mustachioed paceman who extended his wickets tally to 49 in his last six Tests. 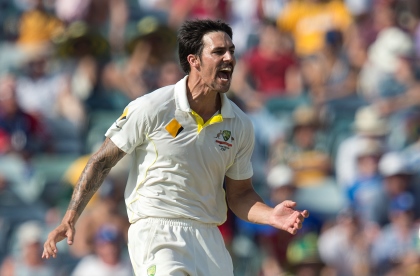 Round one went to Australia and Mitchell Johnson, who rattled South Africa on a juicy Centurion track in the first Test (source – australiantimes.co.uk)

On a pitch conducive to his bowling, Johnson damaged the home team, both physically and mentally; at times posing a real threat of injury even to top-order batsmen. On top of that, the visting batsmen clearly outscored their home counterparts and it seemed like after an unbeaten run of five years, South Africa had met their match in Australia again. For the record, the last time South Africa lost a series was against Australia at home in 2008-09, and a certain Mitchell Johnson was the player of the series.

South Africa’s meek surrender to a team who was until recently a wreck in overseas Test matches over the last year predictably raised questions about their world champion status. Smith himself fell twice to Johnson, his nemesis who had already injured him twice before. While Johnson was able to extract enough bounce from the Centurion surface, South Africa’s world-class unit was worryingly found wanting. In short, it was a disastrous way to start off the series and critics already began to sharpen their knives to signal the end of Proteas domination and start of another Australian era. Or so they thought. Time and again, South Africa have proved to soothsayers their amazing ability to bounce back. One has to look no further than their last two series – at home against India they almost converted inevitable defeat into a world-record victory at the Wanderers before sealing the series at Durban. Against Pakistan in the UAE, they levelled the series coming from behind to protect their undefeated run.

One swallow does not a summer make. Johnson might have bounced out South Africa at Centurion, but now he had to contend with a slow pitch at Port Elizabeth for the second Test. South Africa swiftly sprung into action after their opening loss, firstly by denying Johnson another juicy wicket on a platter; secondly, by dropping their inconsistent spinner Robin Peterson in favour of Wayne Parnell to complete an all-pace attack with the trio of Dale Steyn, Morne Morkel and Vernon Philander. As it happened, South Africa showed the determination worthy of a champion team to cruise to one of their best victories of recent times. Smith, who was panned for electing to field at Centurion, did all things right this time as far as his captaincy was concerned. With overcast conditions predicted on the final day, Smith opted for a declaration early on Day 4, setting Australia a target of 448.

Openers David Warner and Chris Rogers amply showed that there were no demons in the pitch by rattling off 126 at more than four an over. With a session to go on the fourth day, the score read 141/1 and the match would surely go to the fifth day? But the South African bowlers showed why they are the best in the world in the final session. The ball was scuffing, the pitch was getting slower. Morkel came into his own, suddenly looking like bringing life to a dead pitch. He removed Alex Doolan thanks to a stunning catch from the captain. One could sense the steely determination of the Proteas now, stuff that has made them unbeaten over the last half a decade. Philander condemned the Centurion centurion Shaun Marsh to a pair by trapping him first ball, and then arrived Steyn – angrier than usual – raring to have a crack. 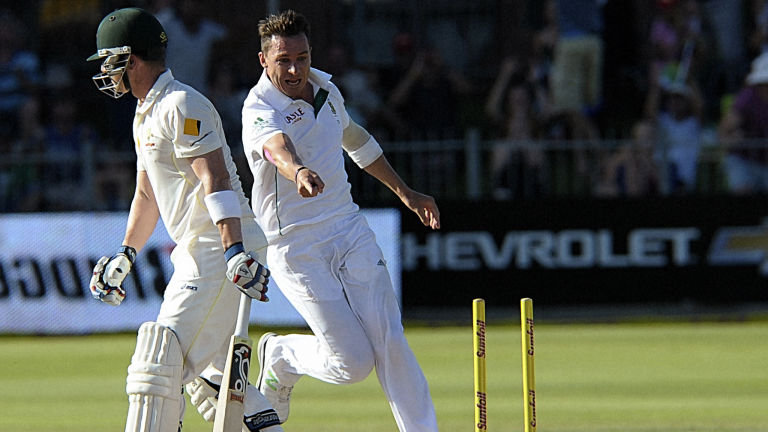 Round two went to South Africa and Dale Steyn, who produced a memorable spell on Day 4 in Port Elizabeth to cause Australia’s startling collapse to defeat (source – skysports.com)

What followed was one of the best displays of reverse swing bowling in recent memory. Steyn’s pace bowling mates had created enough pressure on the Aussies and South Africa had their tails up. The outswinger got rid of Michael Clarke, the very next ball a beauty of an inswinger dismissed Steve Smith. The Steyn which we missed at Centurion was back, and in the midst of a red-hot match-winning spell. As if this was not enough, Brad Haddin found his middle stump destroyed four overs later by another Steyn-gun, this time it was the late reverse swing that made the delivery unplayable.

Australia slid quickly, and went on to lose by 231 runs, part-timer Dean Elgar snaring last man Nathan Lyon to bring the curtains down on a manic session and a highly satisfying Test match. Steyn finished with 4/55. If these figures do not convey any sensational implosion, 9 wickets for 64 in 30.4 overs surely do. The band at St. Georges was well and truly alive, and so is the Test series. Ahead of the decider, South Africa will gain a lot of inspiration from their Cape Town stats – they have won eight and drawn two of their last ten Tests at the venue and the last time Australia batted here, they were skittled for 47 in that famous game in 2011-12.

Not just Australia and South Africa are level with each other. The two bowling attacks are as well. First round to Johnson, second round to Steyn. Bounce ruled at Centurion, swing reigned at Port Elizabeth. Though it can be said that South Africa have the edge, given how they bowled on a barren wicket. On the batting front, Australia will have more issues to sort out, none more so than Clarke’s form – the Australian captain has gone 11 innings without a fifty. Fittingly, the finale will be played before the best crowd of the summer, with the Newlands faithful, who were robbed of their New Year’s Test by the antics of the BCCI, expected to flock to the ground in droves.

Indeed, Cape Town promises to be a rip-roaring knockout. The series is at stake and both teams will go all out to subdue each other. It has to be one of the most awaited matches in recent times. South Africa – who will be chasing their first home victory against Australia since 1969-70 – have the momentum, but you never know what might happen.