Having outplayed India in the limited-overs leg, hosts New Zealand will be buoyed going into the two-Test series. Originally scheduled to be a proper three-Test rubber before a tight calendar meant scrapping one Test at India’s behest, the series provides the visitors with yet another chance to score an elusive away Test win, while the Black Caps will look to build on their recent success.

Auckland’s Eden Park – scene of the only game that India did not lose in the ODI series – will host the series opener from February 6-10. The second and final Test will be played at the Basin Reserve in Wellington from February 14-18. India are unbeaten in the four Tests they have played in Auckland (two wins and two draws). This will be the first time since 1990 that they will play an Auckland Test. By contrast, their record at the Reserve is poor – four defeats and a sole victory (back in 1967-68) in six Tests, the only draw coming in the third Test of India’s previous visit in 2008-09.

New Zealand’s squad is the same that beat the touring West Indians 2-0 in December, with the only addition being Jesse Ryder, named as back-up for Ross Taylor, who is set to become a father during the series. Given Taylor’s current form however, his team-mates must be praying that the baby delays its arrival a bit. As for Ryder, he has made a remarkable comeback into the international set-up after slipping into coma last year.

New Zealand’s biggest strength is their pace attack, lead by the ever-improving Trent Boult and backed by the hard-working Neil Wagner, the incisive Tim Southee and Doug Bracewell. The spin department looks a bit thin, with the talented but raw Ish Sodhi thrust with the role of first-choice slow bowler. India would also be wary of Kane Williamson, who is turning out to be a batsman of true class. His and Taylor’s presence will be reassuring to the Black Caps in case the openers get out early.

Under Brendon McCullum, New Zealand are shaping up into a good all-round unit, even more so in home conditions. As far as his batting is concerned, he is going through a lean patch – just one fifty-plus score (a century in the Dunedin Test against the West Indies) in the last eleven innings. As captain, he is expected to contribute more with the bat and this series might just signal a return to form. 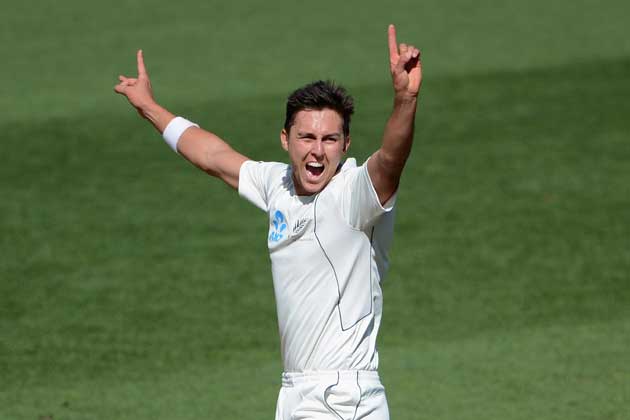 Trent Boult has grown into a quality fast bowler in just two years, and the series against India will be another challenge that he will relish (source – ibnlive.in.com)

India have made one change from the squad that lost in South Africa, with left-arm spinner Pragyan Ojha making way for uncapped fast bowler Ishwar Pandey. India drew a few positives in spite of their 1-0 defeat in South Africa, most notably the way their batsmen applied themselves against Dale Steyn and Co. Cheteshwar Pujara confirmed himself as India’s best batsman, while Virat Kohli showed that he was not just a limited-overs specialist. These two will hold the key if India are to put up a good total in New Zealand. Along with them, Ajinkya Rahane and Murali Vijay were the others who impressed in South Africa.

But the same cannot be said of Shikhar Dhawan and Rohit Sharma, both of whom have found overseas conditions a whole new ball game altogether. The bowling remains a headache despite the comeback of the experienced Zaheer Khan. As always, the fast bowling is one area where India fall short compared to their opponents. It will be interesting to see which of Ravichandran Ashwin (who averages 74 overseas) and Ravindra Jadeja (who took 6 wickets in the second Test in South Africa) gets the nod for the spinner’s spot.

Unless MS Dhoni’s overseas captaincy record is corrected, he will at best go down in history as an average Test captain. If his bowlers continue from where they left in the ODI series, the quest to bag 20 wickets in an overseas Test will become even tougher. His own batting form outside of home has been ordinary, and improving on that is sure to be a challenge. However, he does have the distinction of being only the second Indian captain to win a series in New Zealand, when he led his side to a 1-0 win in their previous visit in 2008-09. Given India’s last ten away match results under Dhoni – nine defeats and a last-gasp draw – that victory seems a long time back.

New Zealand are certainly a better outfit, at least at home, than their ranking of eighth suggests. They are five points behind 7th-placed West Indies, whom they comprehensively beat in their latest Test series, a 2-0 win (should have been 3-0 had it not been for the Dunedin rain) in the three-Test series at home. Before this success, they were held to a 0-0 draw in Bangladesh and suffered a 2-0 defeat in England, both in two-Test series. Their recent home record is good – only one loss in the last ten Tests. Their series win over the West Indies was their first over an opposition other than Zimbabwe and Bangladesh since 2005-06, when also they had beaten the West Indies at home.

India have held on to their second position in the rankings in spite of the stark contrast between their recent home and away results and Australia’s Ashes clean sweep. Their latest series was the one in South Africa, where they lost the two-Test series 1-0, performing much better than expected. This was their first overseas assignment since 2011-12. Prior to the series in South Africa, India were unbeatable at home, snatching six victories on the trot (4-0 and 2-0 sweeps over Australia and West Indies respectively). Their last overseas match and series win came in the Caribbean in 2011, when they won a three-Test series 1-0. 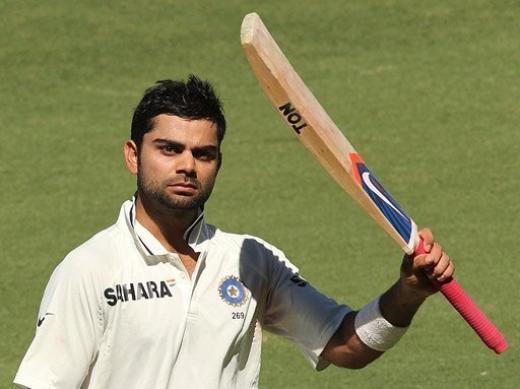 The aggressive Virat Kohli showed plenty of maturity in South Africa, and going by his good form, New Zealand will be hoping to see his back as soon as possible (source – 9cric.com)

New Zealand’s success in the series against the West Indies was built around a superb bowling performance from 24 year-old left arm fast bowler Trent Boult. Boult picked up 20 wickets in the three Tests at just 15.4 and a strike rate of 35. In the year 2013, he took 46 wickets in 12 Tests, and has developed into the spearhead of a potent pace attack which can unsettle the best on a given day. He was not part of the ODI series and will be fresh and raring to go at the Indians, who have not exactly shown a lot of keenness for quality fast bowling in recent times.

Virat Kohli was the only top-order batsman to succeed in the ODI series debacle, scoring runs in sublime fashion as his team suffered one defeat after another. He might have played most of his cricket so far at home, but Kohli showed that he is indeed the real deal with an impressive performance in South Africa. He has made the recently retired Sachin Tendulkar’s No.4 position his own, and in combination with the classy Pujara, poses the biggest threat to New Zealand’s bowlers, in particular the young spinner Sodhi. Kohli might not have got enough support from his teammates in the ODI’s, but come the Test series, his fellow batsmen can be expected to apply themselves better, as shown on the South African tour.

New Zealand, like almost all the other nations, have shown of late that there is no place like home. On the other hand, India have statistically the worst away record among the top eight teams in the last three years or so. It will be difficult for India to bounce back and actually win the series; even though a close contest can be expected, I go for an eventual 1-0 victory for New Zealand.