Less than 24 hours remain for the start of the biennial one-off one day international between Ireland – my favorite cricket team – and England. England have played in Ireland thrice before, but this time the excitement has been unprecedented.

The difference between this time and England’s three prior visits to their neighbouring country is that the fixture will be contested at the new stadium in Malahide, also known as ‘The Village’. A sell-out crowd of close to 11,000 is expected for the game, by far the largest ever attendance at a cricket match in Ireland. Ireland’s earlier home fixtures were held at either Clontarf or Stormont, but tomorrow will see a permanent new home of Irish cricket being unveiled, and who better than arch-rivals England to play the inaugural international there.

Ireland will no doubt be raring to go at the English, who have rankled many an Irish supporter by picking a squad devoid of most big names. However, I believe not much should be read into it, as England’s ODI outfit is quite different from their Test team, and a similar squad will also take on Australia in the forthcoming one-day series. In fact, a full-strength Ireland side have a great chance of beating an under-strength England side, backed by their passionate supporters who will no doubt immerse the ground in a delightful sea of green.

The picturesque Malahide cricket ground, which will play host to the much-awaited ODI between Ireland and England tomorrow (source – cricketireland.ie)

What indeed will be most frustrating for Irish fans is the fact that erstwhile Irishman Eoin Morgan will captain the English eleven, which will probably also include the tall fast bowler Boyd Rankin, another Irishman who has embarked upon the dream to play Test cricket for England. It would be really interesting how Ireland’s public at the ground respond to Morgan captaining the old enemy in an international match played at the very place where he learnt his game – the Malahide Cricket Club.

England have an undefeated record in ODI’s in Ireland, winning all three games in 2006, 2009 and 2011 respectively. Yet, the William Porterfield-led home team know that expectations this time are higher than they were at any other time in the past. In spite of the disappointingly low number of games against top opposition, Ireland have been, by far, the leading Associate nation for the past few years. Coached by Phil Simmons and guided by the dynamic Warren Deutrom of Cricket Ireland, the national team has gone from strength to strength in the limited opportunities they get.

The past few months have been particularly significant for the growth of Irish cricket. The inaugural inter-provincial championships – played in the three-day format as well as the one-day and T20 formats – have been a success, with many promising youngsters being identified. Finally, Irish cricket have a system by which home-bred players can be supplied to the national team – which is of immense importance, because in all probability, barely a few, if any, from the current squad will be fortunate enough to play Test cricket for Ireland. Over the next few years, the aim should be to develop a top-notch first-class cricket system in the country, which is a prerequisite for Test match status.

Moreover, Ireland came agonisingly close towards achieving a maiden series win over a full member during their two-match home ODI series against Pakistan in May, which they lost 1-0, securing a tie in the first game, and losing the second – a game in which they allowed Pakistan to snatch victory from the jaws of defeat. It was only lack of experience that made them falter at the end. Last month, Ireland, not surprisingly, became the first Associate team to qualify for the 2015 World Cup. 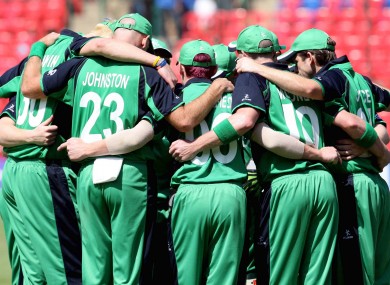 The spirited Irish team have a great opportunity to beat England in front of a sell-out home ground when the two teams lock horns in the one-off ODI (source – thescore.ie)

Thus, a new-look England outfit know that they will certainly not have it easy. One only has to go back to Bangalore 2011 – when Ireland stunned a full-strength England side – to know that the hosts have it in them to score yet another victory over major opposition. Paul Stirling has grown to become Ireland’s best limited-overs batsman, and along with skipper Porterfield, Gary Wilson, the seasoned Ed Joyce and the O’Brien brothers, forms a solid batting line-up well-versed with home conditions. On the bowling front, Tim Murtagh and Trent Johnston – who is going to retire in three months and will be looking for a memorable day – form a potent new-ball pair, with support from the wily George Dockrell and John Mooney. It is also possible that all-rounder Eddie Ricahrdson might make his debut, as Alex Cusack is out injured.

At the same time, England have got a few one-day experts who can be real threats to the Irishmen, most notably Morgan himself, who can be quite destructive with the bat in the death overs. Michael Carberry and Jos Buttler can be equally effective, while in the bowling department, there is the pace of Steven Finn and the spin of James Tredwell. It must be remembered that the last time England played in Ireland in 2011, they won despite fielding a not-so-strong team.

A victory tomorrow will indeed be a massive boost to Irish cricket, just as the Bangalore victory was two years ago. A new home ground, full house, arch-rivals, a sunny forecast.. there cannot be a better platform for Ireland to defeat the English once again. Actually, it could have been better had Morgan and Rankin played for their home side (imagine their strength in that case), but unfortunately, that is the way world cricket works.

Nearly eleven thousand at the ground plus many more throughout the world – Ireland does have a lot of support from the neutrals – will be hoping for another heady Irish win tomorrow. And as an Irish fan since 2007, I too will be praying for the same.