It is a bit surprising to me that many soothsayers are predicting a handsome series win for hosts England in the upcoming Ashes, some even going to the extent of a prospective whitewash. While it is good to be optimistic, one cannot help but think that the touring Australians will at some point show their true worth in the series, and who knows, might actually have a go at regaining the urn itself.

The high expectations from England are understandable to an extent, given that their strike bowlers have hit form at the right time, and their batting line-up is one of the most solid in Test cricket at present. On the other hand, Australia’s batsmen, save for captain Michael Clarke, do not inspire much confidence, while in spite of a promising pace battery, the continued lack of an effective spinner gives a thin look to their bowling stocks as well. The recall of Chris Rogers (who has been in very good form for Middlesex), the desperation to fast-track Australian citizenship for Pakistan-born leg-spinner Fawad Ahmed and the poor form of David Warner and Shane Watson – not to mention the off-field shenanigans by some of the players – are all being seen as indicators of a disaster waiting to happen. 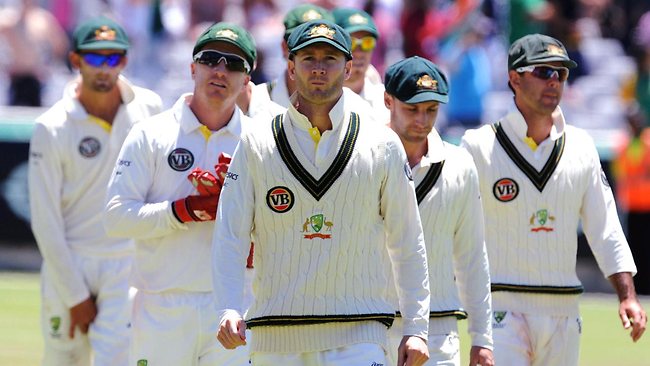 With him playing the dual role of captain and leading batsman, a lot will depend upon Michael Clarke and the manner in which he marshals his resources (source – .88db.com)

However, recent Ashes series have often dispelled the notion of  any team being ‘pre-series favourites’. The best example is the epic series of 2005, where all it took to derail Australia’s campaign was a cricket ball, on which the great Glenn McGrath trod and ended up twisting his ankle. His bowling in the series was never the same again and he had to eat humble pie, for he had displayed sheer cockiness by predicting a 5-0 whitewash defeat for England much before the rubber got underway. Then in 2006-07, England were on course to fight their way back into the series in the 2nd Test at Adelaide, before a sensational collapse and Australia’s galloping victory chase paved the way for the hosts’ 5-0 clean sweep. In 2009, the final difference between victory and defeat for the Australians could well be put down to a last-wicket stand by the English tail-enders in the opening Test.

Thus, when it comes to the Ashes, there is no team that can be called ‘overwhelming favourites’. This tag could have been applicable to the Australians of 1998-2005, and so they proved too. But that team was a true, world-beating champion side, surpassed only by the West Indians of the 1980’s. Let us not forget that the current England team is nothing like that  champion Australian team. They were rolled over by Pakistan in the Gulf not too long ago, and came were just a wicket away from a certain series defeat in New Zealand just three months back. Yes, they are the second-best team in the world at the moment, but they have quite a lot of ground to cover before they can challenge South Africa, as was proved in the summer of 2012. Thus, the three instances mentioned above suggest England have failed to win Test series against countries ranked lower than them at least thrice in the recent past. If they believe that the Ashes will be a walk in the park, they can do so at their own peril. 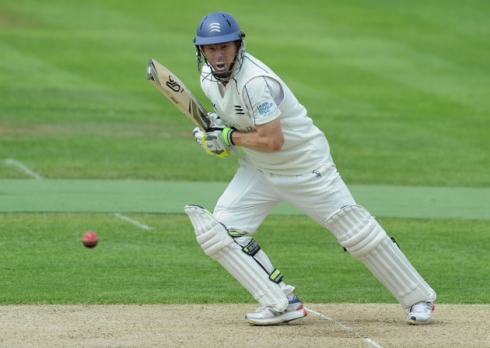 Australia’s Chris Rogers while playing for Middlesex. His form this season has brought some hope for his team’s chances in the Ashes (source – london24.com)

Granted that Australia have never seemed so vulnerable in recent times, following their horror series in India and given their inability to find suitable replacements for Ricky Ponting and Micahel Hussey. But if you remove the Indian debacle, their recent performances are anything but abysmal. In their home summer, they nearly beat champions South Africa before  blanking Sri Lanka. And save for Hussey, that team bore an almost similar look to the one selected for the Ashes. In fact, if you compare Australia’s overseas performances of last two years to those of England’s, they actually turn out to be better, with series wins in Sri Lanka and West Indies and a draw in South Africa. Judging the team solely by their performances in India – where conditions were quite the opposite of those expected in England – would be a huge mistake.

If there is one area where Australia have the potential to match up to England, it could be their pace attack. If this attack, which will be led by of the workhorse Peter Siddle, the very impressive James Pattinson and the tricky Mitchell Starc, find form as a group, then all Michael Clarke needs is support from two or three of his batsmen, which could be provided by the likes of Rogers and Brad Haddin – both of whom have had good success in English conditions. And as mentioned earlier, the fate of the Ashes has often hinged on the minutest of events – fortunes can change at any time during the five-match series.

Chris Rogers hit the right note when he said that his team is being a bit undervalued in many respects according to him. The 35-year old, who has played just one Test so far, has logged 790 runs in 8 games in the county Championship thus far, sounded like a man who is quietly confident of his team’s as well as his own chances in the Ashes. And the battle-hardened opener knows his cricket, having scored close to 20,000 first-class runs.

Fifteen days to go then.