Attacking cricket and positive captaincy from both the sides ensured a result in the four-day game between Ireland and Australia A at Belfast even though only 16 overs were possible on Day 2. In the end, it was Australia A who triumphed late yesterday, the final day, by a margin of 93 runs.

Despite lack of experience proving to Ireland’s undoing, it was heartening o see the youngsters stand up and be counted. Their most exciting batsman Paul Stirling continued his purple patch, slamming a glorious 115 from only 142 balls, studded with 17 fours and a six. Replying to Australia A’s competitive 312/9 declared in the first innings, the Irish top order wobbled against the Test-class Australian side on Day 3, but it seemed like Stirling was batting on a different planet altogether.

When the third wicket fell at 58, Stirling had already raced to 51 off 45 balls; when he was dismissed for 115, stumped by Brad Haddin off off-spinner Nathan Lyon, the score was 154/4 – numbers that underline his complete domination at the top of the order. Following his recent exploits for both Middlesex and the Irish ODI team, this amazing innings against an Australian side consisting of at least seven players expected to play in the forthcoming Ashes is further proof of the 22 year-old’s temperament to play at the highest level. 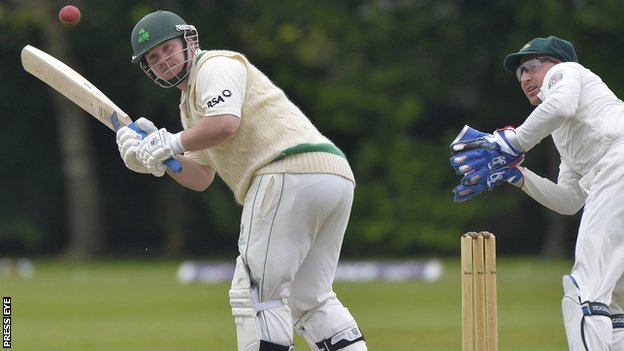 The bright young star of Irish cricket – Paul Stirling dispatches one to the fence during his innings of 115 against Australia A (source – bbc.co.uk)

Kevin O’Brien had won the toss and had no hesitation in inserting the tourists in with generous cloud cover greeting the sides on Day 1, and it was Johannesburg-born right-arm paceman Max Sorensen who stole the show. Sorensen combined with the old warhorse Trent Johnston to reduce Australia A to 139/6 in a fine spell of controlled seam bowling. However, all-rounder Steve Smith’s mature 133 and his game-changing 157-run stand with Peter Siddle steered the tourists to safety, the declaration coming overnight before start of play on Day 3. Sorensen finished with a career-best 5/50, while the ever-reliable Johnston backed him up with 4/68.

If the first day was riveting, the third day was nothing short of extraordinary. As many as three declarations were witnessed on a sunny Sunday, starting with Australia A’s overnight decision. That was followed by Kevin O’Brien, rather surprisingly, declaring his team’s first innings at just 186/4 – 126 in arrears. Stirling, in the course of his hundred, put on 96 for the fourth-wicket with the experienced Andrew White. Buoyed by the healthy cushion of runs, Australia A openers Alex Doolan and Nic Maddinson went hell for leather. Sorensen could not repeat his first innings feats, and was clobbered for 42 in his 5-over spell.

The score after 10 overs read 84/0, which swelled to 174/0 in 20.2, whereupon Haddin called the third declaration of the day. Maddinson continued this game’s trend of youngsters seizing the opportunity in a stunning show of big hitting and piercing strokeplay. The 21 year-old New South Wales southpaw creamed an unbeaten 113 off a mere 63 balls with 13 fours and 6 sixes. In a quirk of coincidence, the home captain Kevin O’Brien had scored also 113 off 63, also with 13 fours and 6 sixes during his famous assault on England at Bangalore in the 2011 World Cup. 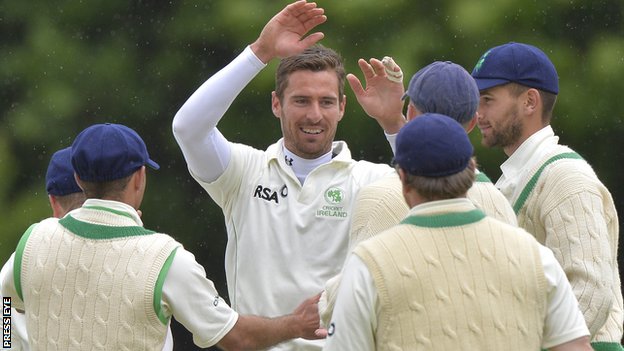 Maddinson’s hundred came off just 51 balls, while his partner Doolan, though overshadowed, contributed 56. It was as if a Twenty20 game was on at the Civil Service Club Ground, with all the frontline Irish bowlers recording economy rates of more than 7.4. With the momentum firmly on their side, the tourists had Ireland at 51/3 at stumps. The three scalps included the vital one of Stirling for only 6. The rain threat loomed large at the start of Day 4, with Ireland requiring 250 more with 7 wickets standing. 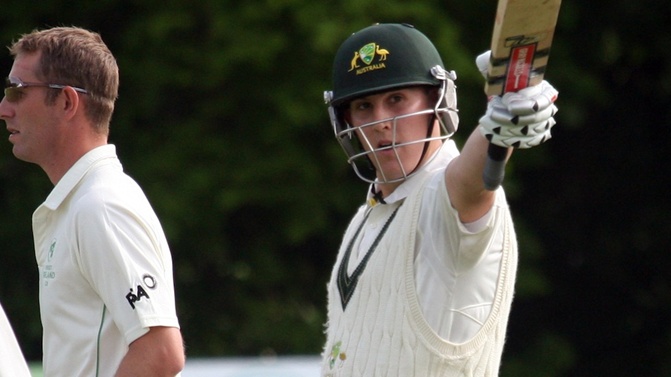 On the final day, Australia A tightened the noose as Ireland contrived to collapse from 92/3 to 112/7, with only young James Shannon showing a degree of application in making a solid 35. However there was one last youngster wanting to create an impression – 22 year-old wicketkeeper Stuart Poynter, who is signed with Middlesex, cracked a career-best 63 from 79 balls to give the crowd something to cheer about. He was last out, caught behind off Siddle with the score reading 207.

While Ireland’s wayward bowling and brittle batting in the second innings were cause for concern, the performances of Sorensen, Stirling and Poynter were certain indications that the Irish cricket system is improving by the year. Facing a side with seven Test players is never easy, and more so in the case of this game, what with Ireland missing at least four of their key players. Kevin O’Brien’s decision to declare might have been too bold in the context of the game – especially since his team had a fair chance of taking a first-innings lead – but the desire to achieve a result in spite of the rain threat reflected  the positive mindset of the Irish team.

Australia A will be no doubt relieved to win this game after their shoddy batting show early on the first day, giving them a couple of Ashes prospects to consider in Maddinson and left-arm spinner Ashton Agar, while Ireland will take quite a few positives peppered with some areas of concern, while at the same time continuing their steady march towards attaining Test status.