Less than two months after England escaped with a 0-0 result on their three-Test tour of New Zealand, the two teams will face off again, this time in a two-Test series in England. This will be New Zealand’s 16th visit to England (they have won two series, in 1986 and 1999), and their first ever tour consisting of less than three Tests. An additional Test would have been obviously great, but with a packed calendar including the Ashes, England have their reasons.

The series will have two back-to-back Test matches – Lord’s in London will play host to the season opener from May 16-20, while the second Test will be played at Headingley in Leeds from May 24-28. New Zealand have an unenviable record at the hallowed Lord’s, having won just one Test in 15 attempts, losing six. The sole win came during their famous 2-1 win in the four-Test series in 1999. At Headingley too, New Zealand have managed a solitary win (in 1983) in six matches, losing four.

The two teams have tussled 97 times in Test matches, and the recent 0-0 deadlock stretched the number of drawn matches to 44. Of the result-oriented matches, England have over the years almost always dominated – winning 45 to New Zealand’s 8. New Zealand came heartbreakingly close to clinch a rare series win in March this year, which means that their latest series win over England still remains the 1999 triumph. The last time the two teams played in England was in 2008, when England won the three-Test series 2-0. In the last six Tests played in England, the hosts have won 5 and lost none.

Alastair Cook’s England almost ended the previous season on a losing note, as their last pair held on to deny New Zealand in the nail-biting Auckland Test. It had been a bitter-sweet season for England, as their 0-2 setback at home to South Africa was followed by a historic 2-1 victory in India.  They are currently ranked second, 14 points behind South Africa and only 2 points clear of India. Brendon McCullum’s New Zealand continue to be 8th, and leaving aside two drawn series (at home against England and in Sri Lanka), it was a forgettable season gone by for them, for they lost every Test they played in the West Indies, India and South Africa. A series win has been long overdue for the Black Caps – their last series win (over opposition excluding Zimbabwe and Bangladesh) was at home against the West Indies in 2005-06, while their last away series win against top opposition was back in 2001-02 in the Caribbean. 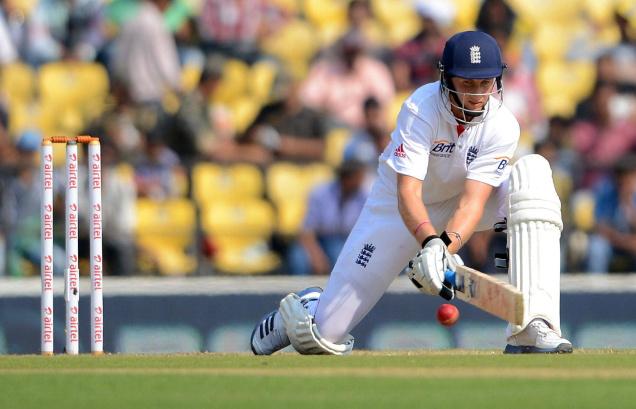 Young batsman Joe Root will be looking to carry his impressive domestic form into the series against New Zealand (source – thehindu.com)

Yorkshire’s 22-year old right-handed batsman Joe Root has been in wonderful form in the ongoing domestic season, with a penchant for playing big innings – he has scored 182 against Durham, 236 against Derbyshire and most significantly 179 while leading the England Lions against the touring New Zealanders in the recent drawn warm-up match. He had a poor outing in New Zealand, as he averaged just 17.6 in the three Tests, but there is no denying his ability at the highest level, indeed he scored a stonewalling 73 in his debut innings at Nagpur last December. This series might just mark his arrival as England’s future middle-order pillar. New Zealand’s Trent Boult is fast emerging as a highly effective Test bowler, and he scalped 11 English victims in the recent drawn series, including a career-best 6/68 at Auckland. With the conditions at Lord’s and Headingley expected to aid the seamers early in the season, this left-arm medium-fast bowler will be the one to watch out for.

Trent Boult had often troubled the English batsmen during the recent series in New Zealand, and his team will be hoping for more of the same (source – firstpost.com)

New Zealand had defied the odds and the form books to almost score a historic win over England in March, and they will no doubt fancy their chances to better their feat at home. However, playing England in England will be a different proposition. Although my prediction for the above-mentioned series had fallen flat, I will stick to a 1-0 win for England this time.