In the 2013 season, Ireland are all set to take some major steps towards reaching their long-term dream of attaining Test status by 2020. Easily the most impressive and consistent of all non-Test playing countries, the spirited ‘Boys in Green’ will be looking to make the most of every opportunity that comes their way in this extremely crucial year for Irish cricket.

One of the drawbacks in Ireland’s enthusiastic quest for full membership has been the lack of both, a proper first class structure and a stadium matching up to international standards. From this season on-wards, Cricket Ireland has sought to  build on both these counts. The most significant aspect of the season is the introduction of the three-team inter-provincial championship across all three formats. The domestic first-class competition consisting of six three-day matches will start on 14th May and end on 29th August.

The three teams – Leinster CU, North West CU and Northern CU will play each other twice in a double round-robin league format. For the 50-overs competition, the three teams have been christened as Leinster Lightning, North West Warriors and Northern Knights, and this tournament too will follow the same format. In fact, the first match of this tournament has already been played, with Kevin O’Brien’s Lightning scoring a 2-wicket win over Andrew White’s Knights at the Hills on 6th May. The T20 competition too will follow the same format.

The captains of the three domestic teams at the launch of the Inter-provincial 50-overs competition (source – hnhpartners.co.uk)

Besides their unending spirit and positiveness, Cricket Ireland also has the ICC to thank, for they became the first recipient of the ICC Targeted Assistance and Performance Programme (TAPP) in 2012, through which they were given a USD $1.5 million award for three years. The objective of this funding programme is to help Ireland develop a first-class structure, create an academy system for further development of talented cricketers and secure regular fixtures with full-member nations. Given their performances in the last six years, it is apt that the ICC chose Ireland as the most deserving of all associate teams to benefit from their new scheme. Also, it is good to know that for all their flaws and shortsightedness, the ICC are doing their bit to promote cricket in Ireland.

The most frustrating aspect of Ireland’s journey has been the poaching of their top players by England, thanks to a ridiculous rule which deserves to be scrapped if international cricket is to be taken forward. Ed Joyce and Eoin Morgan have been snapped up by England in the past, and while Joyce has returned to Ireland after falling out of favour in England, Morgan is at present a vital cog in England’s limited-overs set-up and he even captained England in their one-off ODI clash against Ireland in 2011. The players cannot be blamed, as they aspire to play the highest form of the game, which is Test cricket.

Though Ireland are making rapid strides due to the experience derived by many of their players from playing in the County Championship, this has a downside too, for they fear that talents like George Dockrell (Somerset) and Paul Stirling (Middlesex) might generate interest from England. A recent blow to Ireland was the departure of fast bowler Boyd Rankin, who moved to England with the hopes of playing Test cricket. 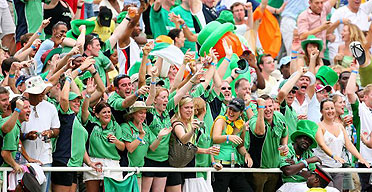 Irish cricket fans will be having a lot to look forward to in the 2013 season (source – guardian.co.uk)

The new three-day tournament will surely help those players without regular experience of multi-day cricket to become well-versed with the first-class game. In addition to the three new inter-provincial tournaments, the 50-overs Bob Kerr Irish Senior Cup will be played as it has been since 1982. Known as the most important knock-out cricket competition in Ireland, it comprises of 32 teams from the four provincial divisions (Leinster, Munster, NCU and North West). The current holders are The Hills, who beat Merrion by 8 wickets in 2012. In June, Ireland will also play a four-day game with Australia A as part of the latter’s England tour.

Ireland have almost virtually sealed a berth in the 2015 50-overs World Cup, as they lead the table at present three points clear of the Netherlands. Also, they seem to be on the road towards yet another Intercontinental Cup (4-day) title, as they are a good 12 points clear of second placed Afghanistan. This alone suggests that Ireland have been consistently a cut above the rest among the associates over the last few years.

This season, the national team will play as many as three home ODI’s against full-member countries – two matches against Pakistan on 23rd and 26th May at Clontarf, and the much-awaited RSA Challenge match against England on 3rd September at the brand new 11500-seat stadium at Malahide. These are the two big teams against whom Ireland have achieved World Cup wins, and they will no doubt fancy their chances this time around, for even in 2011, both Pakistan and England were given a scare by Ireland in home ODI’s. 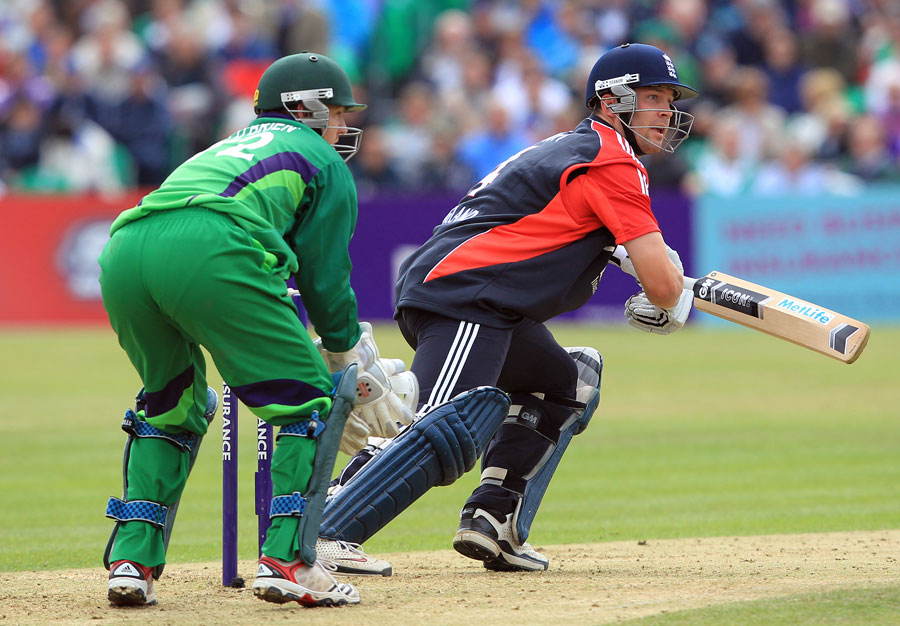 Action from the 2011 RSA Challenge ODI between Ireland and England, which the latter won by 11 runs. Will 2013 see an Irish win? (source – espncricinfo.com)

In fact, England have never really dominated Ireland as much a full member is expected to against an Associate in the five ODI’s they have played so far, the results being – England won by 38 runs, Belfast 2006; England won by 48 runs, Georgetown 2006-07; England won by 3 runs, Belfast 2009; Ireland won by 3 wickets, Bangalore 2010-11 and England won by 11 runs, Clontarf 2011. This season’s duel at Malahide is being billed as the biggest cricket match ever to be contested on Irish soil, and one can see why, as Ireland have always been up to the mark over their fancied neighbours, and there is no bigger joy for an Irish cricketer or fan to relish beating England, as the historic win at Bangalore in the 2011 World Cup showed.

The summer of 2013 will be all about the Ashes, but cricket junkies would do well to follow Ireland’s progress in what might to prove to be a path-breaking season. Ireland’s cricketers know that this season is one golden opportunity they cannot afford to miss, and as a fan of Irish cricket since 2007, I am certainly looking forward to a few more ‘giant-killing’ episodes.