Bangladesh will be playing an overseas Test series of at least two matches for the first time since the 2010 tour of England when they take on Sri Lanka in a two-Test series starting March 8. The Sri Lankan player contract dispute has mercifully settled at least for now, and the hosts will field their best team, under new captain Angelo Mathews, against their fellow South-Asian opponents who are still way below Test class despite more than 12 years at the top level.

Bangladesh have played 12 Tests against Sri Lanka, the most they have played against a single country. Sri Lanka have completely dominated Test matches against the ‘Tigers’, winning all the matches contested since their first meeting in 2001. Eight of these Tests have been played in Sri Lanka. Seven of the 12 victories have been by an innings, and the closest that Bangladesh have ever come was a 107-run defeat at Dhaka (Mirpur) in the first Test of the last series the two teams played, a two-Test series in 2008-09. This game was also the only instance of a Sri Lanka-Bangladesh Test going into the fifth day, a fact that clearly underlines how one-sided most of the contests have been. The last time a series was played in Sri Lanka was in 2007, when the hosts swept the 3-Test series, winning all matches by an innings.

Sri Lanka are currently ranked 6th, but only a single point ahead of the West Indies. This season they have been below-par, winning only two Tests out of eight, both at home. In home series, although they beat Pakistan 1-0, they could only manage a 1-1 result against New Zealand. Their weaknesses were exposed during a 0-3 whitewash defeat in Australia, and they have not won an overseas series against a top team since 1999-00. Bangladesh showed a few signs of improvement in their latest series, at home against the West Indies, but eventually lost both Tests rather tamely. Prior to that, they lost home series to the West Indies and Pakistan last season; while their last Test overseas was the one-off Test against Zimbabwe at Harare in 2011, which they had lost by 130 runs. Mushfiqur Rahim’s side are ranked 9th, at the very bottom of the Test rankings table. Lack of regular Test cricket is also not helping their cause – Bangladesh have played just 11 Tests in the last three years.

Going by Rangana Herath’s recent form, the Bangladeshi batsmen will be in for a tough time when they face him (source – telegraph.co.uk)

Sri Lanka’s spin spearhead, the left-armer Rangana Herath, had a brilliant calendar year 2012 – he took 60 wickets in 10 Tests to lead the charts, and was one of the bright spots during the forgettable Australian tour, taking 12 wickets in the three matches. Since Muttiah Muralitharan’s retirement in 2010, Herath has taken over the task of spearheading the inexperienced Sri Lankan bowling attack. The pitches in Sri Lanka at the end of the season will aid spin more than ever (he took 19 wickets in 2 Tests against England during the same time last season), and he will be a tough customer for the tourists to handle.

Meanwhile Bangladesh will have to do without their star player Shakib al Hasan, who is injured. In his absence, southpaw opener Tamim Iqbal will be expected to give assured starts at the top to his team. Though he can do well to have a better conversion rate, he can be dangerous if the opposition lets him off the hook. If he recreates the same kind of form that he was in in Bangladesh’s last away series of at least two Tests (in England in 2010, where he averaged 67), then Bangladesh can provide a semblance of a challenge. 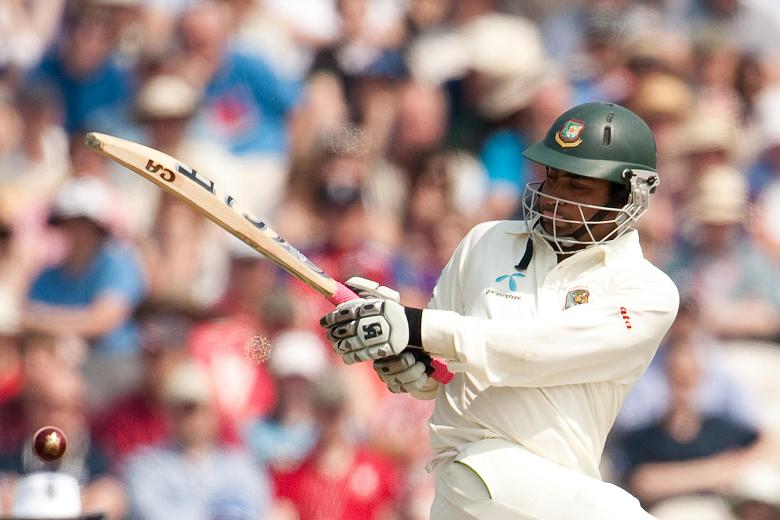 The onus will be on opener Tamim Iqbal if Bangladesh are to put enough runs on the board in Sri Lanka (source – thetimes.co.uk)

Bangladesh, especially without Shakib al Hasan, will find the going tough against a team which relishes playing at home. I expect Bangladesh’s run of defeats to Sri Lanka to extend further – in other words, a 2-0 win for the hosts.