Just last season, Ajit Agarkar had pulled out of the Mumbai Ranji Trophy squad citing differences with the team management following his exclusion from a particular match. Later he was surprisingly picked as captain, and he repaid the team’s faith in his experience by leading Mumbai to a 40th Ranji Trophy title this season. Life did come a full circle for the seasoned pace bowler, who has now been a part of eight Ranji-winning teams.

Mumbai trounced Saurashtra by an innings and 125 runs in a hugely one-sided final to regain the trophy for which they last won in 2009-10. Mumbai, with 40 wins is now the second most successful first-class team after New South Wales (45 Sheffield Shield titles). Just to put Mumbai’s ruthless dominance in the premier Indian domestic tournament since its inception in 1934-35, no other team has managed more than 7 titles. The period from 1958-59 to 1972-73 was when Mumbai were invincible – they won 15 successive titles during that duration.

Mumbai might have only just made it to the semi-finals, but there is no denying the fact that this champion team almost always manages to up their game when the stakes are highest. The way their bowlers demolished Saurashtra in the final was truly symbolic of a team desperately hungry to add to their illustrious history. Saurashtra, already having suffered a setback due to the unavailabilty of their two batting mainstays, twice collapsed like a pack of cards, as nerves got the better of them – after all they were playing in a final for the first time (under the team name ‘Saurashtra’), whereas Mumbai were playing their 44th, and that too at their home ground. That Mumbai is a big-game team is best confirmed by the fact that they have lost just 4 out of 44 finals, the last being a heartbreaking 2-run defeat to Haryana in 1990-91.

As the knockout stages drew closer, Mumbai seemed to be hitting the right notes with all the players putting their hand up whenever it mattered. Abhishek Nayar enjoyed a brilliant season with the bat, finishing second in the top run-scorers list, and only 34 shy of a tally of a thousand. Not to mention his impact with the ball at times – he took a sensational 6/13 against Bengal in the league stage, enlivening  a drawn match. He can certainly be looked as a prospect for a pace-bowling all-rounder in the Indian team, but unfortunately the selectors thought otherwise while picking the India ‘A’ and Board President’s XI squads slated to face the touring Australians in February.

Dhaval Kulkarni had an ordinary tournament until he ripped through the opposition both in the semifinal and final. In those two crucial games the talented quickie took 14 wickets, in the previous 7 games he had taken 16. Agarkar himself came up with a devastating spell (4/15) as he combined with Kulkarni (5/32) to hasten Saurashtra’s demise in the final, and he even smashed a century at a crucial stage in the semifinal. 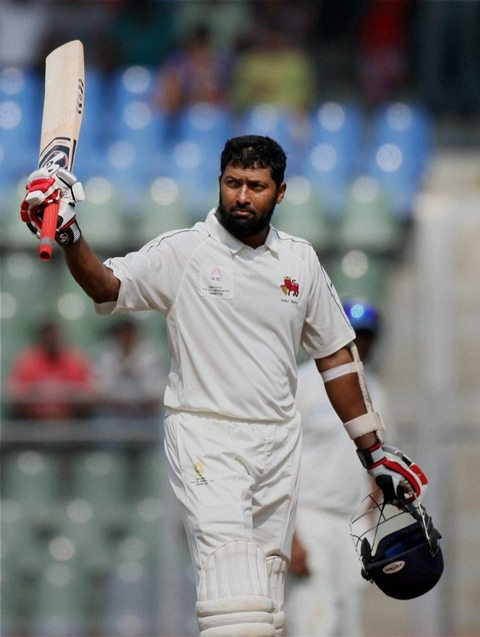 The old warhorse Wasim Jaffer broke the record for the most runs and most hundreds in the Ranji Trophy this season (source – deccanchronicle.com)

Then there is Wasim Jaffer. This absolute legend of the domestic game became the Ranji Trophy’s  highest run-scorer and century-maker of all time during his vital innings of 132 in the final. Jaffer put behind his personal worries (his father is hospitalised) and logged 835 runs in just 7 matches. I strongly feel that Jaffer deserves a second wind as far as a place in the Indian Test team is concerned, especially in the current scenario of a struggling opening pair. Jaffer was ably supported by the youngsters wicketkeeper Aditya Tare, opener Kaustubh Pawar and middle-order batsman Hiken Shah. Tare in particular came of age with a handsome tally of 842 runs. Ankeet Chavan, the slow left arm bowler, bowled the most sensational spell of the season when he took 9/23 against Punjab in the league stage (the third best Ranji figures). Sachin Tendulkar played a substantial part of the tournament after quite some time, and hopefully his two hundreds will give him confidence going into the important rubber against Australia.

Agarkar proved to be a really effective leader, always there to pep up the youngsters and ever-responsive to ideas and suggestions, as Mumbai’s coach Sulakshan Kulkarni also agreed. He might not have had as successful a Test career as he would have liked (though he was a regular in the ODI team till 2007), but this victory will certainly rank as one of the best moments of his career. The veteran of 16 seasons had been part of seven Ranji-winning squads, but as captain of a winning team the joy would surely have been greater, especially after the unwanted incident of last year.

The exploits of Jaffer and Nayar have rightfully led many to talk of their national comebacks, but there do not seem to be any such hopes for Agarkar, for at the moment he must be deservedly savouring his personal triumph. The lanky journey-man, for all you know, might be already planning for yet another Ranji season. For there are more trophies to be won – New South Wales’ record needs to be broken after all.