This is the fifth and final part of my Year-End Review of 2012, and here we look at the best international matches from across all formats that were played in the year. The short list includes two Tests, a One Day International, a Twenty20 international and a Women’s T20 International:-

That a thrilling draw was the best match of the year underlines the greatness of Test cricket. World champions South Africa staged one of the greatest escapes ever seen in Test history at the Adelaide Oval – the draw was not sealed until just two balls of the game were left. Michael Clarke (230) cracked yet another double ton as Australia amassed 482/5 on the first day itself. The South Africans fought back through Morne Morkel (5/146) to dismiss the hosts for 550, but the run rate was a scary 5.12. Imran Tahir’s figures read 0/180 in 23 overs. Their openers Greame Smith and Alviro Petersen replied strongly with a 138-run stand, Smith making 122. Debutant Francois ‘Faf’ du Plessis made 78 while injury-hit Kallis scored 58 from No.9, as the Proteas made 388. At the end of the third day, Australia were 111/5 in the second dig, but in command. They declared at 267/8 on the fourth day, setting South Africa 430 to win. 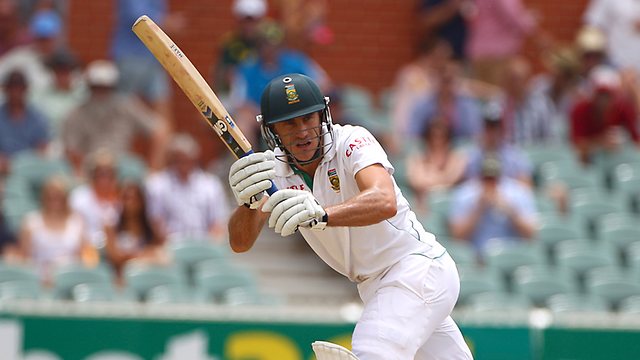 A big Aussie win looked likely as the visitors crashed to 45/4, ending the day at 77/4. Day 5 was a day of survival for the visitors – even the normally free-flowing AB de Villiers took 220 balls for his 33. But it was du Plessis who did the star turn, scoring an outstanding unbeaten 110 off 376 balls, batting for close to 8 hours. He put on 99 with Kallis for the 6th wicket to rescue his team, but Peter Siddle was bowling a lion-hearted spell. 233/5 became 240/8, and Australia were back in the game. However, du Plessis and Morkel saw off the remaining 4 overs successfully, achieving a great draw against the odds. Drained and exhausted, Australia fielded a weakened bowling attack for the final Test at Perth, and duly lost the game by 309 runs, and with it the series. It would not be far-fetched to say that it is because of du Plessis that South Africa are still the champions.

The West Indies, not for the first time, lost a match that they certainly should not have. The hosts declared at 449/9 in the first innings, with the evergreen Shivnarine Chanderpaul leading the way with 103*. Australia stuttered to 133/4 in reply before captain Michael Clarke scored 73. The West Indies were a good 120 runs ahead when the 9th wicket fell at 329, but a game-changing unbeaten last-wicket stand of 77 between Ryan Harris (who scored a career-best 68*) and Nathan Lyon enabled Clarke to declare at 406/9 in the hope of pressing for victory. His risk paid off, as his quicks tore through the Windies top-order, reducing them to 17/4 before they ended the fourth day at 71/5, leading by 114.

There was no fight from the lower order on the last day, as West Indies folded for 148, setting Australia 192 to win in two sessions. Shane Watson stroked a quick 52 to lead Australia’s charge, and in spite of a wobble from 106/1 to 140/5, they crossed the finishing line in fading light, reaching 192/7 with Ben Hilfenhaus hitting the wining single. Australia went on to win the series 2-0, and West Indies were left to rue at what might have been.

Bangladesh had upstaged their more fancied opponents India and Sri Lanka to reach their first Asia Cup Final, setting up the summit clash with Pakistan. Having squandered a chance to beat Pakistan in the league stage, Bangladesh were determined to create history in front of their fans, and it showed from the way they bowled. The pacemen struck early to have Pakistan at 19/2, which put the brakes on their scoring. The wickets continued to fall, and Bangladesh were on top when Pakistan were 133/6 in the 35th over. Sarfraz Ahmed’s 46* provided a late burst and a much-needed impetus to the total, which finally read a relatively better 236/9 in 50 overs.

Tamim Iqbal started off positively, putting on 68 with Nazimuddin for the first wicket. But his loss for 60 meant Bangladesh were 81/3. Nasir Hossain and Shakib al-Hasan (68) chipped away closer to the target both were dismissed within nine runs, at which point the Tigers needed 58 in 38 balls. A few more wickets fell, and a few boundaries were scored. Bangladesh needed 25 off 3 overs, 19 off 2. Umar Gul went for ten in the penultimate over, which meant 9 were needed off the last over with 3 wickets left. The bowler Aizaz Cheema bowled tightly, conceding only two singles off the first three balls. 6 off 3. The fourth ball fetched 3 runs due to an overthrow. Off the fifth ball, Abdul Razzak was bowled, leaving Shahadat Hossain to score 4 off the last ball. But he could only manage one leg-bye, leaving Bangladesh at 234/8 and Pakistan winners by 2 runs (their second Asia Cup title). Many of the Bangladeshi players cried profusely in spite of a highly spirited showing, for they had come heartbreakingly close to a historic victory. 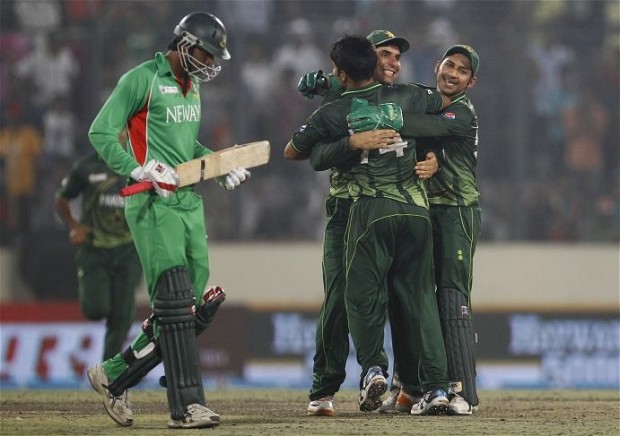 The Pakistani players celebrate after snatching a last-gasp two-run win in the Asia Cup final against Bangladesh (source – telegraph.co.uk)

This match did not go to the last ball, but it scored on account of being a low-scoring see-saw battle in a crucial Super 8 game of the ICC World Twenty20. Pakistan’s spinners spun a web around South Africa, reducing them to 28/3 in the 7th over. The run-scoring remained sedate, and it was JP Duminy who livened up the innings, making 48 off 38 balls to ensure South Africa reach 133/6 in 20 overs. The Pakistan openers put on a quick 24 under 3 overs before their team started to collapse. 24/0 became 37/4, 63/4 became 76/7. Pakistan had lost 7/52 in 69 balls, and were staring at defeat against a rampaging South Africa. Umar Gul joined Umar Akmal at 76/7, with Pakistan needing 58 off 33. Gul changed the game around, beginning with two sixes in the 16th over and one more in the 17th. The equation now read 22 off 18, and then 15 off 12. Dale Steyn bowled a tight 19th over, giving away 6 runs and accounting for Gul (32 off 17). Requiring 9 off 5 balls, Akmal smashed Morne Morkel for six before a single gave Saeed Ajmal strike, 2 needed off 3. Ajmal duly scored a boundary as Pakistan scored a praiseworthy fightback win, reaching 136/8 with two balls to spare.

Pakistan Women snatched a 1-run victory in a low-scoring league match of the Women’s ICC World Twenty20. Only Sana Mir (26) and Nain Abidi (25) crossed 10 as Pakistan Women were restricted to 98/9 off their 20 overs, collapsing from 66/3 to 96/9. In reply, India Women were well placed at 50/2 in 11 overs when they began to lose their nerve. Pakistan Women slowly began to gain control, with the equation getting tougher after every over. It was down to 14 off the last over, to be bowled by Sana Mir. Even though Nagaranjan Niranjana hit a four off the first ball, 8 were needed off 3, and finally 4 off the last ball. Niranjana collected two, but was run out going for the third, leaving India Women at 97/8.

With this post I conclude my little year-end review of the year gone by. Hope for an even better year of cricket and Test cricket in particular, as 2013 beckons.

A very Happy New Year to one and all, from The Cricket Cauldron.