Test cricket continued to enthrall fans all over the cricket world in 2012, with a new champion emerging when South Africa toppled England off their perch. 42 Tests were contested in the year, with 31 ending in results and 10 in draws.

South Africa were the only team to be undefeated in the year, and are rightly the world champions at present. Series wins in England and Australia affirmed the fact that the Proteas’ No.1 tag is here to stay. England overturned a seemingly below-par year at the end of the year by winning a historic series in India. Australia continued their progress under a dynamic captain, winning 7 and losing 1 out of 11 Tests. Pakistan played few matches, but enjoyed one of their best moments as they whitewashed then champions England in the UAE.

India’s downward spiral continued, starting the year with a whitewash defeat in Australia and ending with an unexpected home defeat to England. Sri Lanka were patchy and were yet again found wanting overseas. The West Indies were impressive in spite of losses to Australia at home and in England, ending the year with four Test wins in row. New Zealand went quite a few steps backward as a Test team, losing three series before squaring the series in Sri Lanka. Zimbabwe and Bangladesh played just one and two Tests respectively, not surprisingly losing all of them. 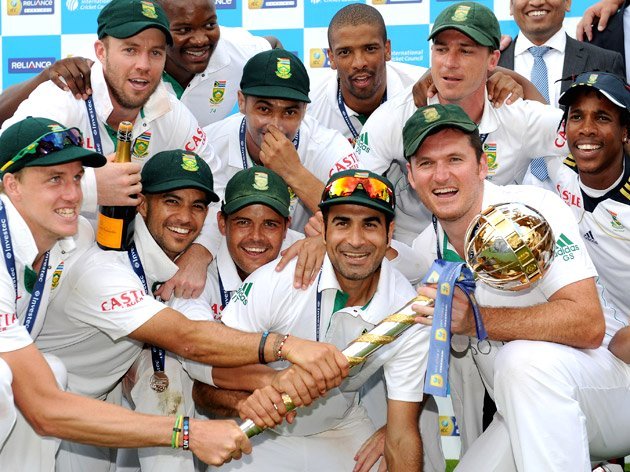 South Africa were crowned the new world champions, toppling England off their perch with a 2-0 win in England (source yahoo.com)

– South Africa became the world Test champions after they beat England 2-0 in a 3-Test series in England. The hosts, who were the previous champions, held on to the top spot for only a year. The Proteas then retained the mace with a 1-0 victory in Australia later in the year.

– Hashim Amla became South Africa’s first ever triple-centurion when he scored an unbeaten 311 against England at the Oval, a Test which South Africa won by an innings and 12 runs. The previous highest Test score by a South African was AB de Villiers’ 278 against Pakistan in 2010-11.

– Zimbabwe’s only Test in the year was a disaster – they suffered their worst ever Test loss, losing by an innings and 301 runs to New Zealand at Napier. They recorded their lowest ever Test total – 51 in the first innings, and were bowled out twice in a day (51 and 143) – only the third such instance in Test cricket.

– England won their first series in India in 28 years, when they beat the hosts 2-1 in the 4-Test series under Alastair Cook. They had last won a series in India in 1984-85, by the same margin. During the series, Cook became the first batsman to score centuries in each of his first five Tests as captain.

– Pakistan recorded their first clean sweep in a Test series against England, when they took the 3-Test series between the two teams in the UAE by a margin of 3-0. In the third Test at Dubai, Pakistan’s first-innings total of 99 was the 5th lowest first innings total and the lowest in 104 years for a winning team.

– Alastair Cook also became England’s highest century maker in Test cricket, when he scored his 23rd hundred (190) against India at Kolkata. He also became the youngest batsman to reach 7000 Test runs during that innings. 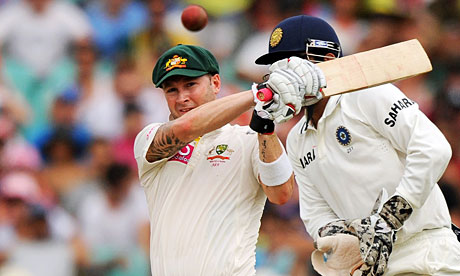 It was a magnificent year for Australian captain Michael Clarke, who logged 1595 runs at an average of 106.33 (source guardian.co.uk)

– 2012 was Michael Clarke’s year – the Australian captain amassed 1595 runs in 11 Tests at 106.33. He recorded the highest individual score of the year – 329* against India at Sydney, and became the first man to score four double-hundreds in a year in Test history. Clarke’s run tally of 2012 is the highest by an Australian in a calendar year, and the 4th highest of all time. His 329* became the highest Test score by a batsman batting at No.5.

– South Africa’s captain Greame Smith became the captain to have led his team in most Test matches in the Lord’s Test against England, surpassing Australia’s Allan Border’s record of 93 Tests as captain. Smith now needs three more Tests to become the first man to captain his team in 100 Tests.

– Vernon Philander of South Africa became the joint-second fastest bowler to reach 50 wickets (7 Tests), and the fastest in 119 years when he dismissed Doug Bracewell of New Zealand at Wellington.

– Tino Best of the West Indies recorded the highest ever score by a No.11 batsman in Test history – he made 95 against England at Edgbaston, surpassing Zaheer Khan, who had scored 75 for India against Bangladesh in 2004-05.

Tino Best surprised all and sundry by recording the highest ever score by a number eleven in Tests – 95 against England (source telegraph.co.uk)

– Bangladesh recorded their highest ever Test total when they scored 556 in the first innings against the West Indies at Dhaka, obliterating the 488 made against Zimbabwe at Chittagong in 2004-05. However, the total also became the joint-third highest total by a losing team in Test history.

– Abul Hasan of Bangladesh recorded the highest score by a No.10 batsman on debut, when he made 113 against the West Indies at Khulna. He also became only the second man to score a debut ton from No.10, after Australia’s Reggie Duff, who made 104 against England at Melbourne in 1901-02. Hasan’s innings is also the second highest by any No.10 in Tests. 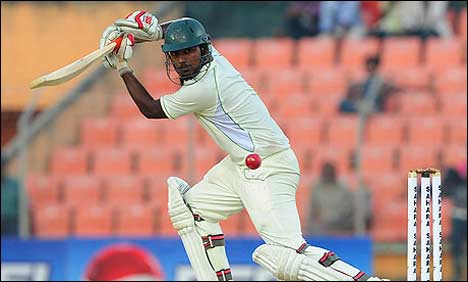 Abul Hasan’s 113 against the West Indies at Khulna was the highest score by a debutant batting at No.10 (source thenews.com.pk)

– South Africa’s Imran Tahir recorded the worst ever bowling figures in a Test match, when he ended up with unenviable match-figures of 0-260 in 37 overs (0-180 and 0-80) in the Adelaide Test against Australia. The dubious record earlier belonged to Pakistan’s Khan Mohammed, who returned 0/259 against the West Indies in 1957-58.

– Sohag Gazi recorded the best figures in an innings and in a match by a Bangladeshi bowler on Test debut, when he took 6/74 in the second innings and 9/219 in the match against the West Indies in Dhaka.

– On November 25, as many as four Tests were in progress simultaneously – Bangladesh v West Indies at Khulna (5th day), Australia v South Africa at Adelaide (4th day), India v England at Mumbai (3rd day) and Sri Lanka v New Zealand at Colombo (1st day). This happened for the third time in history, after March 21, 1998 and March 11, 2001.