Their struggles in the Test arena over the last twelve years have been well known, but Bangladesh are at least finally showing signs of being a competitive one-day international (ODI) outfit. Their recent home series win over the West Indies by a margin of 3-2 was only their third bilateral series win over a stronger nation, and only the second against a full-strength side following the 4-0 win against New Zealand in 2010-11, also at home.

The rare series win included a 160-run victory in the 2nd ODI at Khulna, which is now Bangladesh’s biggest ever ODI victory. Further, the Tigers were expected to be easily beaten by West Indies’ bunch of one-day specialists especially after their Test series loss. But the hosts showed great tenacity and determination in the ODI series, with both the seasoned players as well as the new faces putting their hands up whenever it mattered. The West Indians were not going down without a fight of course, and came back to level the series after losing the first two matches. But, despite a poor start to their chase of 217, Bangladesh took the decider by 2 wickets. 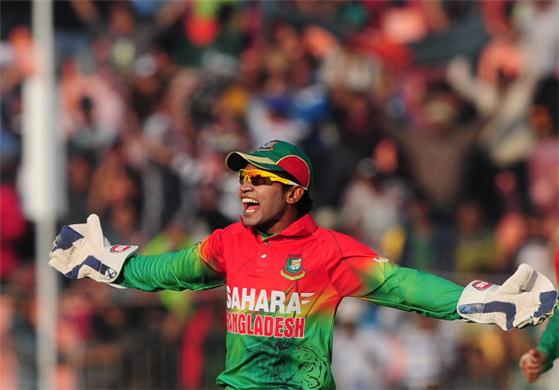 Bangladesh captain Mushfiqur Rahim led from the front as his team beat the West Indies 3-2 in the ODI series (source – tatts.com)

The spinners who only had their brief moments in the Tests, came into their own against Windies batsmen in the ODI’s – most of whom are natural stroke players. Debutant off-spinner Sohag Gazi continued from where he left in the Tests, and he combined with the seasoned Abdul Razzak to script an easy win in the first match, before the record-breaking 2nd ODI saw 19 year-old opener Anamul Haque score an impressive 120 in only his second match. Then Gazi and Razzak were at it again as they condemned the West Indies to an embarrassing 160-run defeat.

West Indies came back to win the next two games, as Bangladesh suffered two familiar batting collapses. Even in the third game, the hosts were struggling a 30/3 in pursuit of 218, and yet another opportunity seemed lost. However captain Mushfiqur Rahim and all-rounder Mahmudullah Riyad – two of the team’s more experienced players – steered their team to safety. Following a few more hiccups, Bangladesh finally emerged winners in a tense finish.

Skipper Rahim led from the front, scoring 204 runs and emerging as the leading run-scorer on both sides, while Mahmudullah underlined his all-round worth by making 159 runs and taking 8 wickets. Razzak and Gazi picked up 10 and 9 scalps respectively to lead the bowling charts. What makes this win more commendable is the fact that the team’s premier player Shakib al Hasan missed the whole series due to injury, while their star batsman Tamim Iqbal had an ordinary series, scoring only 94 runs in 5 innings. It was nice to see the captain and the youngsters assume the responsibility, and eventually come out with flying colours.

Bangladesh players are inconsolable as their team lost the Asia Cup final to Pakistan by only 2 runs earlier this year (source – total-sports.info)

Bangladesh had displayed their potential for being a top ODI outfit earlier this year as well, when they came a heartbreaking two runs away from a maiden Asia Cup victory. They defeated India and Sri Lanka, and could have defeated Pakistan twice (including the final) had Shakib and Iqbal found more support from the rest of the batsmen. The success against the West Indies is probably a culmination of the efforts put in by the squad over the last two years or so – a period which included the 4-0 win over New Zealand, ODI wins home and away against England (the former in the World Cup), and bowling out West Indies for just 61 in an ODI last year. But it also included big World Cup defeats to West Indies and South Africa, and a walloping by Australia at home.

Therefore it is important for Bangladesh to be even more consistent if they are to move up the ODI rankings. They have overtaken New Zealand to be placed 8th for the first time ever. It would be only better for international cricket if Bangladesh continue to win against top teams in the ODI format. The word ‘upset’ is no longer attached to any Bangladesh ODI victory nowadays, and rightly so.

Let us hope that Bangladesh begin to show similar resilience in Test cricket as well – it has indeed been a long wait for their team’s many passionate followers.