The battle for Test supremacy is underway. At Perth, Australia and South Africa are engrossed in a no-holds barred clash which will decide who is the Test champion. South Africa only need a draw while Australia will have to win the Test to recapture the mace which they last held in 2009.

Test cricket is the mother of all things cricket, and indeed this match thus becomes a match of greater stature than say, the World Cup final. But since there is no official Test championship, this match at Perth is as close as it can get to a World Test Championship final. The Test rankings at the moment are the most feasible system to determine the champion team in the real format of the game. However the flaw here is that there is a possibility of two, even three different champions in one year. Just this year in August, it was England taking on South Africa for the championship mace, and now its Australia who are looking to wrest it back.

But let us just assume that this very match at Perth is the actual final of an official World Test Championship – two tough-as-nails teams going one-on-one to decide the champion, on one of the world’s bounciest tracks. Surely, could not get better than this. Add to that, it is the last Test of one of the finest players of the modern age – Ricky Ponting. It has to be one of the two big matches of the year – other being England v South Africa at Lord’s earlier this year when the mace was at stake. 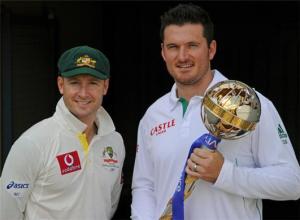 It is the mace that matters – another duel for Test supremacy begins in Perth (source – bbc.co.uk)

Yet, this match is not given importance as compared to the World Cup final – thus stressing the need for an official World Test Championship in the calendar. The first edition of the championship was scheduled to be held in 2013- with the top four teams playing on a knock-out basis before the final is played – but it was frustratingly postponed to 2017 to accommodate the last edition of the Champions Trophy. But will this proposed tournament be a true indicator of Test supremacy over a period of 4 years?

There is a feeling that important series like the Ashes, The Basil D’Oliveira Trophy or the Border-Gavaskar Trophy might get sidelined if the Test Championship gains prominence. Will for instance, Australia, on winning the Championship in 2017, regard themselves as true champions if they lose the Ashes that year? Will the ‘top-four’ format mean that the likes of New Zealand and West Indies won’t ever get a shot at the Championship? These are pertinent points that come into play if the World Test Championship is to begin. Whether the ICC goes ahead with this plan or creates a more feasible system remains to be seen.

Will he, won’t he? – South Africa’s prized possession is at stake at the WACA (source – zimbio.com)

Official championship or not, the mace is indeed at stake at Perth. And no doubt, this mace is the most sought-after piece of silverware for any team who regards itself as fit for international cricket. With no proper championship system in place, this ranking method, with all its musical-chairs over the last few years, is not that bad. Thus for me, the Perth Test is the real World Championship final – whether it comes twice a year or once in three years does not matter to me. That is for the ICC to sort out, understandably.

For now, the big question that remains is – ‘South Africa still or Australia again?’ We will find out in the coming four days – or even less – given the flurry of wickets on Day 1.