This is the second and final segment of my list of Test records which might be untouched forever (continued from Part 1 – https://thecricketcauldron.wordpress.com/2012/10/17/specials-test-records-that-might-never-be-broken-part-1/)

Jim Laker, the English off spinner, made the 1956 Old Trafford Test against Australia completely his own, as he finished with an eye-popping match analysis of 19/90. Laker took 9/37  in the first innings, and then completed the first ever ‘perfect ten’ in the second innings (Australia followed on), taking 10/53. Anil Kumble of India has been the only other man to take all ten in an innings, but Laker’s match haul is unlikely to be repeated – although it did remain a possibility when former Sri Lankan spin wizard Muttiah Muralitharan was in his prime. Laker’s feat is also the best ever in all first class cricket, with only two others managing 18 in a match, way back in 1837 and 1861. 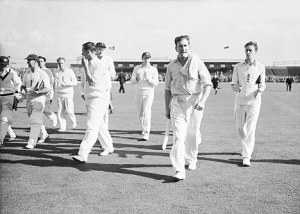 Jim Laker (second from right) leads the victorious English team at Old  Trafford in 1956, the game in which he collected a record haul of 19/90 (source – lccc.co.uk)

In the very first Test match played, between Australia and England at Melbourne in 1876-77, England fielded a slow left armer by the name of James Southerton, who was only 49 years and 119 days old at that time! Surely, experience does matter, but this record is probably the most likely to stay forever – indeed, it would be shocking if today a Test nation decides to award a cap to someone of this age. Southerton played only one more Test, and then achieved an unwanted record – he became the first Test player to die (1827-1880).

England and Yorkshire’s legendary slow left arm bowler Wilfred Rhodes’ Test career spanned a whopping 3o years and 315 days – he made his debut aged 21 against Australia at Trent Bridge in 1899, while he played his last Test against the West Indies at Kingston in 1929-30, aged 52 (when England famously fielded a ‘granddad’ squad – two players above 50 and three more above 40 – and yet amassed 849 in a drawn affair!). India’s master blaster Sachin Tendulkar currently is 6th in the list, his career having spanned 22 years and 293 days thus far, and of course it is impossible for him to play for eight more years. 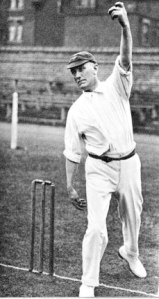 Egypt-born off spinner John Traicos, one of the handful of Test players to play for two countries, returned to Test cricket by turning out for Zimbabwe in their first ever Test, at Harare against India in 1992-93 at the age of 45 – 22 years and 222 days after last having played, albeit for South Africa, for whom he played three Tests in 1969-70 before the Proteas went into exile from cricket. This remians the longest gap between two consecutive appearances for a Test player, and surely, no one will ever attempt to have a shot at this record. Traicos proved that age is just a number, as he took 5/86 on his Test return, and played 3 more Tests for Zimbabwe.

11) Highest score by a nightwatchman

Well, few people may disagree here, given how deep are most Test batting line-ups today – but I am sticking my neck out here that Jason Gillespie’s record innings of 201 not out for Australia against Bangladesh at Chittagong in 2005-06 will forever remain the record of the highest score ever by a nightwatchman. Gillespie, until this Test, had a few doughty 20’s and 30’s to his name, but he achieved his finest batting performance (his only test century) with this record knock – in what ironically turned out to be his last international appearance for Australia. 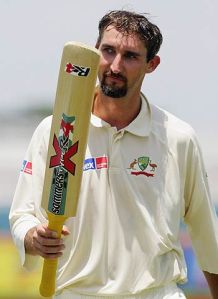 Jason ‘Dizzy’ Gillespie surprised everyone, including himself, by scoring a record 201* in 2005-06 – the highest score by a n nightwatchman (source – espncricinfo.com)

2 thoughts on “SPECIALS – Test records that might never be broken, Part 2”