The Irish veteran Trent Johnston recently lashed out at all those who refer to the non-Test playing nations as ‘minnows’, a term which he feels is deriding to all developing teams. Johnston’s grudge was that teams like Bangladesh and Zimbabwe refuse to play teams like Ireland and Afghanistan, and went on to cite that the former two’s apprehension of losing to the latter two is the reason for their refusal – obviously buoyed by the fact that Ireland beat both Bangladesh and Zimbabwe in the World Twenty20 warm-ups.

Johnston, 38, also said that since the top eight nations obviously could not get time from their packed schedule including the myriad T20 leagues, it is expected that the bottom two Test teams play the Associates on a regular basis. He then went on to state that calling the non-Test nations as ‘minnows’ was absolutely discouraging, and that he was sick of hearing that term time and again before a major tournament approaches. 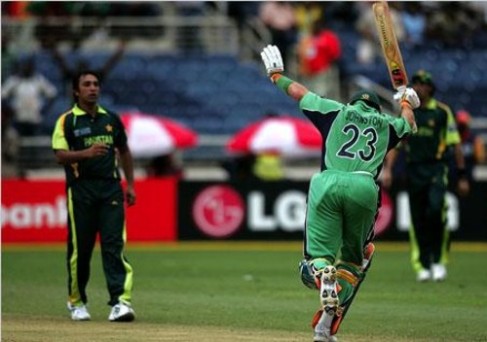 Though Ireland have quite some way before they could become an elite nation, Johnston’s claims are definitely not unjustified. On one hand, the ICC says that it supports the development of the lesser nations, while on the other, it simply does not organise enough fixtures for teams like Ireland and Afghanistan in the 50 overs format – even though Afghanistan’s fixtures against Australia and Pakistan this year have been an encouraging sign – games in which the Afghans were far from being a ‘minnow’. Also, Johnston’s frustration might have also stemmed from the barriers that hinder Ireland’s rise as a top cricket nation – the most unfair being that of England whipping off the cream of Ireland’s talent – a rule that seriously needs to be scrapped if the ICC actually care for the sport’s development.

There are many who believe that the non-Test teams should not be part of major tournaments – why, the ICC itself had decided to do away with such teams in the 2015 World Cup, before they rightly took back the decision due to a furore in the non-Test ranks. How on earth can a tournament be called a ‘World Cup’ without the odd upsets? Kenya, Ireland, Canada and Netherlands all have had their moments in either the World Cup or the World T20, and instead of encouraging them to the fullest, the commercially-driven ICC has just not done  enough in the last decade or so (Kenya’s decline being the most glaring failure). In fact, the last Test nation to make a long-term impact was Sri Lanka, and that was 30 years ago.

Netherlands celebrate after shocking England at Lord’s at the 2009 World Twenty20 (source – theguardian.com)

Admittedly, the presence of non-Test nations in world tournaments will make some of the matches one-sided – but that is exactly how they will learn. The 2007 World Cup was being termed a a dull affair just because Ireland and Bangladesh qualified into the next round at the expense of Pakistan and India – the two teams guaranteed to bring in the gate receipts. Sadly, instead of applauding the feats of Ireland and Bangladesh, the format of the tournament was blamed for India and Pakistan’s exit – when the truth was that the two Asian powerhouses were simply not up to the mark, and that they were undone by two better teams on the day. And the real reason why the tournament seemed boring was because of Australia’s ruthless domination (resulting in one-sided matches), and not because of two deserving teams unexpectedly qualifying for the Super 8.

The road ahead for the Associates and Affiliates will be certainly rocky. Afghanistan, in fact are yet even become an Associate – it just says how amazing their progress has been in the last few years. As for Ireland, the talent drain continues, with seamer Boyd Rankin becoming the latest to move to England in the hope of a Test cap one day. The rest of the nations are still way behind both Ireland and Afghanistan. Kenya’s glory days are long gone, and the ICC can be partly responsible for it.

Thus, instead of deriding these gritty teams and questioning their presence in world tournaments, the need of the hour is to plan a road-map for them to elevate to Test status as soon as possible. Let us accept it, such tournaments would not be worthy of being called global tournaments without their presence – it would rather be a tepid ‘members-only’ affair. After all, the best match of the 2011 World Cup was not the semi-final or the final, it was Ireland’s astonishing win over England – without which the tournament would have been so much less glittering.

As for Johnston, whereas he has done enough for his team to get them where they are, pity that the money-driven powers-that-be haven’t.