That Sanath Jayasuriya relished playing against India throughout his career is well known. He delivered his best performance against them back on October 29, 2000 in what was the final of yet another triangular Champions Trophy held in the desert state of Sharjah. Zimbabwe were expectedly eliminated, thus setting up a summit clash between India and Sri Lanka.

Sri Lanka had been unbeaten in the four games thus far in the tournament, while India managed two scratchy wins over Zimbabwe. Just two days prior to the final, the wily Muttiah Muralitharan had grabbed 7/30 to  help his team condemn India to a 68-run defeat. India were the underdogs going into the final as a buoyant Sri Lanka looked to round off their unbeaten run with a flourish.

India ran into a marauding Jayasuriya, then the captain, on the big day and his innings flattened them to the extent that they ended the match with two utterly dubious records to their name. Sri Lanka chose to bat, and except for Jayasuriya, the top order came a cropper. India were dictating terms with the Lankans at 116/4 in 28 overs – the only hitch was Jayasuriya, who was just preparing to up the ante.

All he needed was a willing ally, who came in the form of Russell Arnold. Jayasuriya had already crossed 70 when the fourth wicket fell and he took his time to reach his century, which came off 118 balls. But later he launched into an assault Sir Viv Richards would have been proud of – indeed he went on to equal the second-highest ODI score, made by none other than Richards himself in 1984. 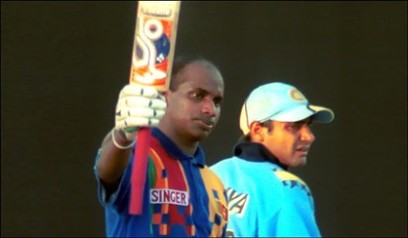 The Matara Marauder celebrates yet another milestone during his awe-inspiring knock (source – msn.com)

His final 89 runs came off a mere 43 balls and together with Arnold (52*), he put on 166 at more than eight an over for the fifth wicket (Arnold contributing less than 25% of it) to transform a struggling Sri Lankan innings into a boundary-hitting fest.

There were still eleven balls to go in the innings when Jayasuriya was out stumped, for a massive 189 off 161 balls with 21 fours and four sixes. A further stay would have most certainly led to the first ever ODI double hundred – which eventually came almost ten years later from the man upon whom the task of chasing the total of 299/5 largely lay.

Sachin Tendulkar had fond memories of Sharjah, courtesy his famous ‘sandstorm’ knocks in 1998 against Australia and was in good touch in the lead-up to this final, having stroked a breezy 61 in the preceding ‘Murali’s Match’. But Jayasuriya had inflicted serious psychological damage on the Indians – seldom has one man made such a huge difference to the pattern of a one-day game.

Even Tendulkar gave up the fight early in the chase, joining skipper Sourav Ganguly in the hut with the score 10/2 – both falling to Chaminda Vaas. That was that then, but the manner in which the rest of the batsmen capitulated was shocking. Vaas was virtually unplayable that day and mopped up the top order to have India reeling at 19/4.

Muralitharan (3/6) was introduced into the attack, and he kept things boiling. The last recognised batsman Robin Singh was out for 11 – the highest score in the innings, with the score reading 44/7 and India staring at a humiliating defeat. It didn’t take long to come, with Vaas finishing the innings off to return 5/14.

India were shot out for 54 in 26.3 overs – their lowest ODI total ever and then the third lowest ever. Worse still, the crushing 245-run defeat margin was the highest ever, until it was left behind three years later. True, India were hardly masters at chasing big ODI totals at that time while Sri Lanka were unbeaten throughout the tourney.

But the manner of this defeat was painful, especially after having Sri Lanka in a difficult position earlier on. It therefore took just one man’s blasting performance to completely turn the game around and shatter India’s confidence. Jayasuriya ended up with 413 runs in the series and was named Man of the Match and Series. His 189 is still the highest ODI score by a Sri Lankan.

While Vaas can be credited with ripping through India’s top order, the actual damage was done by Jayasuriya, from whose assault India could never recover and ultimately succumbed to their most embarrassing ODI defeat.