England saved their best for the fag end of the recently-concluded three-Test series against South Africa, but it was not enough for them to cling on to their crown for a bit longer. The South Africans, perennial chokers in many a limited-overs tournament, staved off the late English challenge to script a worthy victory at Lord’s to be deservedly crowned as Test champions, under the leadership of their record-breaking captain Graeme Smith and coach Gary Kirsten, who interestingly became the first coach to lead two different nations (he was coach of India in 2009) to the top of the test table. Few would disagree that this South African unit has been the most deserving of the handful of Test teams who have occupied the top spot ever since Australia began to decline. Let us go down a few years and scrutinise the other teams who have held the top spot.

For many, the retirements of a clutch of top players from the Australian team after the 2006-07 Ashes threw open the field to other challenging sides. India hoped to stake an early claim, and even won the series in England in 2007. But losses in Australia and Sri Lanka over the next year hampered their progress, and Australia managed to hold on to their coveted pole position. In 2008-09, India silenced Australia at home, and this win made India believe that they could indeed be the Test champions in the near future. Later that season, South Africa tamed the Aussies in their own backyard, and leapfrogged both Australia and India to occupy the top spot, albeit briefly, as they succumbed to a home defeat when Australia paid a return visit a few months later. India, meanwhile hardened their case, by winning the series in New Zealand. England suffered a series defeat in West Indies during the same time, and lost a chance to move up the lad

India’s wobbly stay at the top

Both South Africa and India hardly played any Tests at the start of the 2009 season, whereas Australia visited England, and ended up surrendering the Ashes. This ensured that Australia slipped down again, and South Africa were back on top. This also signalled England’s intentions to be a strong contender to scale the summit. But India were breathing down South Africa’s neck, and scored a home series win over Sri Lanka to be the top dogs in Test cricket for the first time, whereas South Africa and England settled for a drawn series during the same time.

India, though, hardly looked comfortable at the top, and were more than twice involved in must-win situations to hold on to their spot. They could only draw the series against South Africa at home late that season, and followed it up with two drawn affairs in Sri Lanka and South Africa the coming season, each time having to square the series after an early loss to somehow stay at No.1. In between in 2010/11 they won at home against Australia and New Zealand, but their overseas showings were sketchy to say the least. 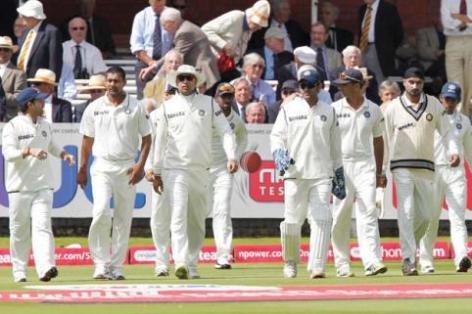 India arrived in England in 2011, still as the top Test team, and riding on the back of an unconvincing 1-0 win in the West Indies. What followed was disaster, and all the fears of India being comfortable only at home were confirmed in the series, which ended in a 0-4 walloping for the visitors. India had reached the top primarily through home wins, and wins over lesser opposition. A determined England exposed the frailties in the Indian ranks, and jumped to the top of the table for the first time. Later in the season, India further sank to abysmal depths, with a similar whitewash in Australia, and the days of being Test champions seemed long gone. India’s performances showed that they were the team, who perhaps least deserved to be at the summit.

England too hit a roadblock immediately after their glorious summer. Pakistan, who were until now silently winning the limited number of series they got, made a statement by whitewashing England in the Gulf in early 2012. The Test table had become a level-playing field, with teams winning with ease at home, and succumbing tamely abroad. England managed to secure a draw in Sri Lanka to hold on to the title, saw off West Indies at home and became all set to await the challengers from South Africa.

England – bit the dust in the Gulf

South Africa finally back to where they deserve to be

In the scramble for Test supremacy, it was always a case of so near, yet so far for South Africa, as they had missed many opportunities to win series after taking an early lead. After losing to Australia at home in 2009-10, they drew in India in the same season, and a year later drew at home against India, and again at home against Australia – all after taking a series lead. Late last year, they also lost a Test at home to Sri Lanka for the first time.

But behind the inconsistency, lay a fact that none of the other teams could boast of – South Africa had lost an away series back in 2006, and had the best overseas winning ratio among all teams – a very important catalyst in easing their road to be the Test champions. Under an excellent captain and an inspirational coach, the South Africans set foot in England with a burning desire to topple England off their perch, and achieved their goal, first by thrashing the hosts in the first Test, and rounding off with a thrilling win in the third.

India hardly looked champion material, while England’s stay lasted a scratchy one year. Possessing perhaps the most complete Test unit in recent times, it is South Africa who indeed look good to remain at the top for the long haul. After quite some time, there seems to be a team who can be actually worthy enough of the crown. However they will have to face a stern test -next up is the tour of Australia, where Smith will be up against an equally fierce captain in Michael Clarke, who is commendably building up a potent team in a bid to regain their Aussie pride of the 2000’s.

A win for South Africa there will further enhance their claim as a true top-ranker, but a loss will dent them a lot – and the mad scramble for Test supremacy will perhaps, begin all over again, and at such times, the need for a World Test Championship will be so badly felt!