South Africa embark upon English shores this summer for a three-Test series, which in all likelihood will decide which is the world’s top-most Test team – the ultimate accolade of being true world champions.

England, after a below-par Asian sojourn, have soothed their nerves by seeing off the West Indies whereas South Africa won a rain-affected series in New Zealand back in March. The series has been touted to be one of the most-awaited in recent times.

While it is England who sit pretty at the top of the Test rankings, it is a bit of a puzzle as to why South Africa have not been able to impose themselves as Number One yet. They were briefly at the top in 2008-09, but that is about it. As far as adaptability to different conditions is concerned, South Africa are indeed better than England.

The Proteas have, in my opinion, three of the world’s five best bowlers in Dale Steyn, Morne Morkel and Vernon Philander. Add to that Imran Tahir, who had taken close to 600 first class wickets before finally making his debut at 32, and a couple of talented pacemen in Lonwabo Tsotsobe and Marchant de Lange.

The batting is as potent with the stylish skipper Greame Smith, who is on the verge of being the most capped captain ever, followed by the legendary Jacques Kallis, the reliable Hashim Amla and the attacking AB de Villiers. They also have the world’s most experienced wicketkeeper, the ever-present Mark Boucher, who might call it a day after the England tour. 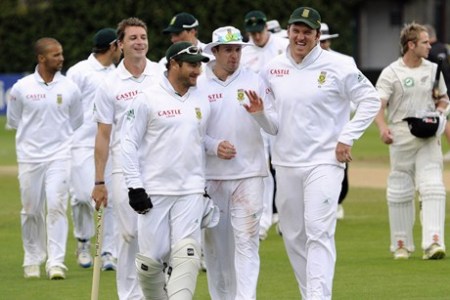 So what is not to fear about this imposing South African unit? Undoubtedly, they are the team most capable to dominate Test cricket for a long period amid today’s mad scramble amongst all Test teams as it has been a level-playing field for quite some time now.

The problem is that the Proteas have not done full justice to their ability. Whereas English teams have struggled in the sub-continent, South Africa have always impressed in such conditions. But somehow they have not been able to win more than one series there since winning in India almost 13 years ago.

Twice they have taken 1-0 leads in Test series in India – in 2007/08 and 2009/10 – with thumping wins no less, only to eventually settle for draws on both occasions following equally convincing defeats.

But the biggest hitch is their home form, surprisingly. When they beat Sri Lanka at home last season, it was their first home series victory since 2008/09, when they disposed off Bangladesh.

They had reached their peak when they won in Australia in 2008/09, only for it to be neutralised by a defeat in the ensuing home series against the same opponents a couple of months later. Twice they have had to come back from a first-Test loss in a home series to eventually win it – against West Indies in 2007/08 and India a prior to that.

In fact, barring Bangladesh and New Zealand, they have lost at least once at home to every other nation they have played since 2007/08, the latest being a surprise 208 run loss to Sri Lanka at Durban, which again followed a thumping innings win by South Africa.

The fact that the two Test series against Australia was drawn was only due a manic session where the visitors notoriously collapsed for 47. The Aussies duly came back to square the series, continuing the trend.

Durban has proved to be a bugbear for the home team of late, with them having to suffer losses there to England, Australia, India and Sri Lanka in the last three seasons. That is why, we were told, that the Boxing Day fixture was done away with for the coming season.

With their tendency of choking in limited overs world tournaments already part of cricketing folklore, the South Africans cannot afford a similar pattern in the Tests. If they want to be number one, they need to start converting series leads into series wins, and more importantly, lose much less often in home Tests – which is a hallmark of a champion test team. A team cannot be on top if it is losing a home test every season, which in turn jeopardises it’s chances of a series win.

This season might be South Africa’s best chance to cement the number one spot. They tour to England and Australia – two places where they emerged victorious the last time they played, four years back. Later they host Pakistan and New Zealand.

If they still do not make full use of these opportunities, they may be in danger of being the best side never to have dominated Test match cricket for a sufficient period of time.